You are here: G J Griffiths 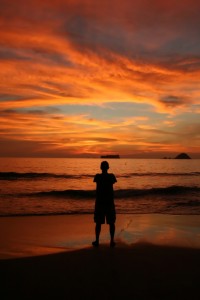 G J Griffiths is a UK baby-boomer who worked for quite a while in the Photographic industry. Then he became a Science teacher for about twenty years. He likes reading (lots!) walking in the countryside and birdwatching – Oh! and being a Grandad! Having retired he thought he would like to write a novel. So why did he write the first one?
Who Do They Think They Are?
Watching those programs on TV about different people looking into their ancestral past, and seemingly becoming very upset about certain individuals in their pedigree, he wondered about how much their emotions had been stirred by forebears, such as cousins, grandparents and even great grandparents. After all they had never met them or never even knew about their existence previous to their research. The tears, regrets and often anger that became evident on the screen betrayed how delicate feelings may often lie very near the surface.
At the same time he had been reading Winston Churchill’s volumes about the Second World War and also reading about the Battle of the Bulge, of Band of Brothers fame. It occurred to G J Griffiths: What if someone was looking into their ancestry and discovered that their forefather was involved in plot to assassinate a famous general from WW2? What if that general was George S Patton who was so vital in relieving the US troops trapped in the Battle of the Bulge? He had read that Patton often could be a thorn in the side of his senior officers at that time.

And so he created three pivotal fictional characters around this idea of unpleasant discovery; of an assassination plot involving the father of Chris Squires. The father he never knew dashes his hopes to the ground. How would Chris feel? How would he react? Once the author started writing the story the characters took over and he had to continue the tale where they took it! It became his first novel, Fallen Hero.

When GJ started writing Fallen Hero he was already well into the collection of stories later to become his second book: So What! Stories or Whatever! But the general direction of the plot and many of the characters were not properly formed at that time. Then along came the idea for Fallen Hero and that took over for the next 18 months or so!

Originally, after he had retired from teaching GJ just wanted to write and write about many of the kids he had taught and tell his readers about some of their hilarious tales. But after a while he realised that so many of the stories would be tinged with sadness or tragedy or poignant moments, and that it was not going to be just another “book of funny stories”. If he was going to include some of the difficulties that the kids’ teachers also faced, many times a day sometimes, then he had to also write about why they wanted to come into education, and more importantly, why they were determined to stay in it!

So Robert Jeffrey was “born” and his story is gradually unfolded and woven between the collection of students’ stories. Robert’s determination to become what he feels is a “good teacher” became a main theme throughout the book. There was a danger then that the book would become a continuous whinge from yet another cynical, grumbling teacher. Enter Kyle Crabbe, the bully, and some of the tales begin to have a sinister theme to them! With that stage set it meant that G J could lead the reader up a path that would allow a twist to it! Be surprised – be very surprised!

Some of the books that Robert Jeffrey had read and that had inspired him to want to teach coincided, strangely enough, with some of the list that G J Griffiths had also valued. It was a list that included: R Delderfield’s “To Serve Them All My Days”, Thomas Hughes’ “Tom Brown’s Schooldays”, D H Lawrence’s “The Rainbow”, E R Braithwaite’s “To Sir with Love”, “Neill! Neill! Orange Peel!”, plus, of course, a couple from The Master – Charles Dickens, such as “Hard Times” and “Nicholas Nickleby”.

G J Griffiths still has many more So What! Stories to tell. Until he had almost finished his second book he hadn’t realised that there was going to be another book-full to come out of his head and onto the written page – maybe even more than one more book.

So What’s Next! has more tales about the kids at Birch Green High School and the progress of Molly, the trainee from the first book, plus her romantic distraction. Will it get in the way of her love for nature and the environment?