You are here: Cathy Cole 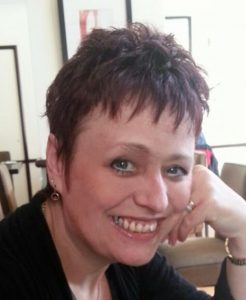 Cathy Cole lives in Northern Ireland with her husband, two sons, and Dexter, a dog who thinks he’s her third son.

After being diagnosed with AS (Ankylosing Spondylitis), Cathy was forced to give up work and began writing. She writes both short stories and novels. Her first short – a humorous take on giving up smoking – won a national award and was broadcast on local radio. Her next took second place in the University of Winchester “Reaching Out” competition. You’ll also find her work in the 2009 and 2010 A Writers’ Christmas—anthologies published for charity. Her latest short story success was with Bridge House Publishing’s Crime After Crime anthology, released December 2012

Spurred by the success of her short stories, Cathy turned to writing novels. Her debut novel Where There’s Smoke—published by Fireborn Publishing—was inspired by the bravery of firefighters everywhere, but especially by those who gave so much on 9-11. Cathy has drawn directly upon her family’s experience in the fire brigade in order to bring realism to her story.

At the moment, Cathy is hard at work on her next novel The Hungry Ghost.