You are here: Products Zanna’s Outlaw by Julie lence 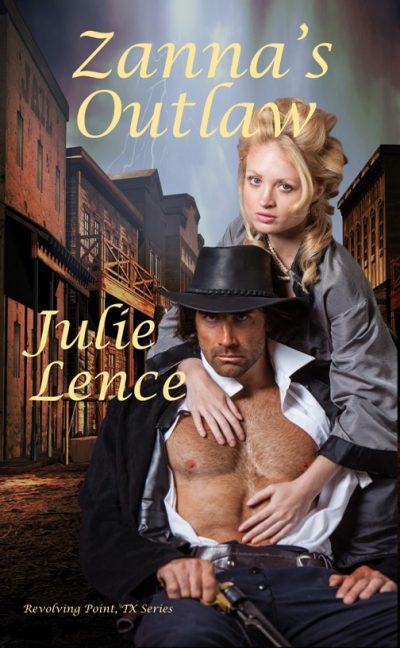 Notorious outlaw Buck Grayson is set to hang for the one murder he didn’t commit, until a last minute pardon sets him free. But there’s a condition to the pardon. He’s to cease outlawing and bring law and order to Revolving Point, Texas, the border town along the Rio Grande, with a reputation worse than his. Zanna is there and still in danger from the fancy-pants attorney seeking revenge against her. Buck will do anything for Zanna–even pin the tin star to his chest to keep her safe–except say the words she longs to hear.

Former soiled dove Suzanna Reynolds wants respectability, a home and children, and she wants them with Buck. Trouble is, Buck isn’t the settling type and has never openly acknowledged she’s his woman. Convinced Buck only took the sheriff’s job to settle a score and not to please her, Suzanna demands he court her to prove his love. Or leave town for good.

Julie was born and raised in upstate New York. She married her high school sweetheart and accompanied him on his twenty-year career with the United States Air Force. Presently, she resides in the Pikes Peak region, where she’s a stay-at-home mom enjoying a career writing western historical romance.

Throughout her school years, Julie enjoyed reading and writing. A friend introduced her to the romance genre in the late 80’s and she was instantly hooked, crediting Judith McNaught and Johanna Lindsey as her inspirations to pen her own novels. As she puts it, Ms. McNaught’s voice is flawless and Ms. Lindsey’s Malory family is endearing and addictive. Combining her fondness for horses, John Wayne and the television series, Dallas, Julie settled into writing about cowboys, outlaws and the ‘old west’ early in her career.

Julie self-publishes her work thru Amazon and designs her covers. When she’s away from her computer, she enjoys taking care of her family and home, exploring the Rocky Mountains and chatting about romance.

Buck Grayson made his 1st appearance in Luck of the Draw. He moved on to appear in Lady Luck and that's when I knew he needed his own story. He was one of those characters that was impossible to ignore, and so much fun to write.

Buck stepped inside, closed the door and didn't make a move toward her. "That woman downstairs is worse than Emma."
"Did you come up here to complain?" She folded her arms beneath her breasts.
"I came to tell you I took this damn job for you.” Plus, it made it easier to flush out Hanson’s hired guns before they harmed her. But she didn’t need to know that. She’d want to help and would do so behind his back if he didn’t let her. “Not because I want a tumble between the sheets, but because you're my woman. That used to mean something to you."
"It still would if you’d tell me you love me."
"Dammit, Zanna. You know I do."
"Then say it," she challenged. "And don't give me the same old line about words being hard for you."
"They are." At least, those words were. The last time he'd said them his family had been murdered. With enemies lurking in the shadows, the same could happen to her. Pissing her off was one thing. He could tolerate her icy glare. Losing her forever was a whole different matter. "That doesn't mean I don't feel them."
She sighed irritably and looked away.
"Doesn’t my coming here count for something when I swore I wouldn’t?”
"If you can't say the words," she returned her gaze to him, "then I want you to prove you love me and intend to stay."
"How?"
"By courting me."
"What the hell do you think the last three years have been?"
"I thought I knew, but now I’m not so sure.” She glared at him. “You say I’m your woman. Prove it.”
"Sonofabitch, Zanna. Couldn’t you just beat me with your fry pan?"
"No," she said in that same snotty tone that had beaten him many times in the past.