You are here: Products You’ve Got Male by Monica Smith 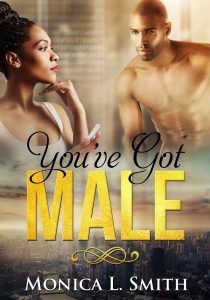 You’ve Got Male by Monica Smith

She claims she may not actually do what she writes about, but she feels a connection to it and enjoys the thrill that drives her to see her stories through to their exciting climax and conclusion.

Anita sat there for a while and waited for a reply, but nothing. She thought, it’s late; maybe he will write back later tonight or tomorrow. So, she logged out of the site and walked to her bathroom and started her bath. She sprinkled some lavender bath beads in her water to help her relax and lit a couple of vanilla candles she had placed sporadically around her bathroom. Anita walked into her closet and selected a short and silky black nightie. It was Damon’s favorite because it left little to the imagination. She placed it on the sink and pulled her hair up into a ponytail. After removing her clothes, she stood and looked at herself in the mirror. “I really want children someday, I just don’t want to ruin this body,” she said aloud, when she heard the phone rang.
Naked, she walked into her bedroom and answered the phone.
“Hello.”
“Hey Nita, you want to hit the Ingram Lounge tonight? They just announced on the radio that they will be hosting a ladies’ night party,” her friend Mandy asked.
“I’m really tired. I have already taken off my clothes and am getting ready to hop in the tub.”
“O-M-G, your ass is getting so old!” Mandy yelled. “It’s only nine o’clock. By the time you wash your ass, do your hair, and put on some clothes, they would just be getting started!” Mandy yelled excitedly. “Plus, you don’t even have to work tomorrow. Have some fun for once!”
Anita thought about it for a couple of seconds and then answered, “I’m not going to be out all night messing with you, Mandy.”
“Who said anything about an all-nighter, Grandma? Just a couple of hours.”
“Who’s driving?”
“You are. You’re the one with the new car. I love riding in style,” Mandy explained. “Pick me up at eleven.”
“Okay, but when I’m ready to go, I’m ready to go. No bullshit,” she told her, remembering the last time they went to the club, when she and Mandy got into an argument because she wasn’t ready to leave.
She hung up the phone and walked back to her bathroom where she had a warm bath waiting for her. Usually she would take her time to relax, but tonight she would have to rush. The one thing that she wasn’t going to push through quickly was giving herself quality time.
Anita dipped her toes into the water, just in case she had made it too hot. It was just right, hot but not scalding. She inched in carefully and then sat down splashing water up to her breasts before cupping more water and sluicing her face.
Thoroughly wet and feeling relaxed, she slid back in the tub and rested her head on the rim. It had been a long time since a man had touched her. In fact, she’d been alone since her husband left. In the absence of a man, she’d mastered the art of masturbation.
The hot water was working its magic, releasing the tension from her body and starting her blood flowing. It was time for a little fun.
Her hands slid down, cupping the full breasts and then pinching her nipples until they tightened with excitement. Running her fingers up and down her body, caressing the smooth swell of curves, started a deep throb between her legs.
She slid her hand down to her hidden treasure and began to play softly with her clit. Self-knowledge honed by time, had her body humming instantly. It only took moments for her body to fill with anticipation from the soft strokes of her finger.
She bit her bottom lip and gyrated her hips slowly, upping the swell of elation pulsing through her body. The warm water surged in tune with her body, ebbing and flowing with increasing power.
As her lady began to swell with desire, she pressed her middle finger down savagely, stroking vigorously. At once her mind rushed back in time. Once again, she saw Damon dip his head, grinning in delight as he licked and sucked, playing with her body masterfully, making her dance and scream with delight.
It was a memory that sent waves of emotions and lust racing throughout her body. “Uhm,” she heard her gasps slip from her wetted lips, her hips now twisting in a staccato tempo, causing the water to surge.
Her heart was beating rapidly, her breathing becoming heavy with anticipation and her nub extremely sensitive. Her body was pulsing now, the pleasure darting through her in silver streaks of want.
Her body arched, the water sluicing over her breasts, splashing in her face. Her clit was on fire, her nipples hard as rock. She writhed for a second, and then her body took over, throwing her over the edge of tension into bliss.
Her body shivered and burned, on fire with delicious thrills. “Shit!” she yelled, as she hit the tip of her climax. She pulled her hand away from her aching clit and grasped the sides of the tub, her body jerking causing a small amount of water to splash on the floor. She pulled her legs close together, relishing the throbbing deep within. When her body relaxed, her emotions became tranquil. She had achieved ecstasy.