You are here: Products Yours Truly by Inez Colbert 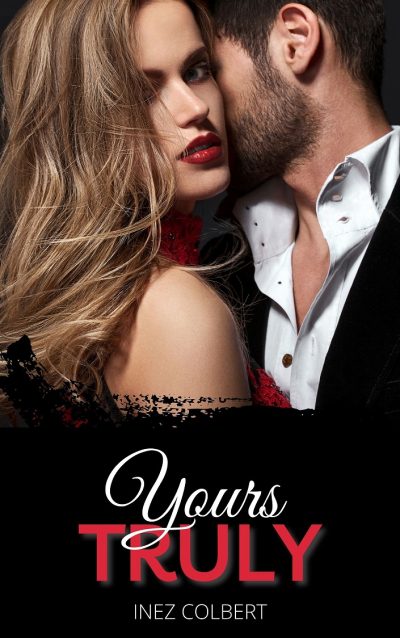 Yours Truly by Inez Colbert

Vivian Mitchell doesn’t believe in love. But she believes in lust.

And there’s a lot of it. With two men. One on each side, a devil and an angel on her shoulder.

Ben is a booty call who has been hooking up with Vivian on and off but it slowly turns into more. There’s nothing as delicious as forbidden fruit and the more she pushes him away, the more he wants her heart.

Chris Boyd doesn’t usually sleep around but when he meets Vivian, he can’t resist her. She’s every man’s wet dream. But she’s kind and sweet and funny, too, and he’s tired of flying solo. He wants her to be his.

Vivian has always had a no-dating rule, but the lines start to blur when Chris is perfect boyfriend material. But Ben starts to crawl under her skin, too, only confusing her more.

It becomes a crazy tug of war, and the climax threatens to shatter everything she worked so hard to build in her life.

She didn’t want to get involved, but oops, there goes her heart.

She just doesn’t know who she’ll give it to.

After years of ghostwriting and signing over copyright to her clients, Inez Colbert has decided to strike out on her own and stake a claim on her talent.

She writes about the things people don't usually talk about and relishes in pushing boundaries. She believes that going where no one else dares is the key to unlocking what's really at the core of our existence.

When she's not writing, Inez Colbert is a mother, a lover, and a tea aficionado. She reads, she cooks, she creates a home, and takes pride in the small things.

I started out as a ghostwriter and spent a lot of time writing books for others people, signing over copyright. It took a while before I became confident in my abilities and was able to link my own name to it.
Yours Truly, in particular, started in 2016 as a story that tested the boundaries and challenged the limitations I had grown up with in a very religious household. It was an exploration of a side of myself that I hadn't been able to acknowledge before. Since then, the story had morphed and changed quite a bit to what it is today. It not only allowed me to be myself, but it broke open a new world where I felt my work was good enough for the world to discover it. Yours Truly, to me, is a symbol of breaking free.