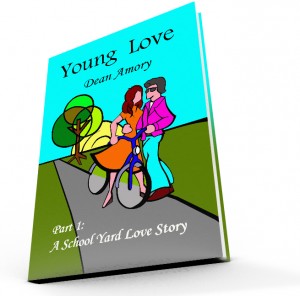 In “Young Love part 1, A school Yard Love Story”, Sean and Katherine fall in love the first day they meet. Theirs is a complicated relationship from the start, but although Katherine questions Sean’s true intentions, and doesn’t always like his behaviour, she cannot help falling in love with him. However, when their relationship becomes too serious and threatens to disrupt her studies and ruin the good understanding with the teachers and with her parents, she breaks up.

For Sean, being dumped is hard enough, but things become really complicated when Katherine promises she will return to him after they graduate from high school. When he discovers that Katherine cannot shake him from her mind, Sean struggles to live up to her expectations and restore their bond. In the process, he is forced to have a good look at himself and to discover his own identity. Slowly, he finds that it’s okay not to have all the answers. After trying for months to convince Katherine to reconsider, Sean gives up. But with Katherine always nearby, he never really manages to distance himself from her.

Dean Amory, real name Edgard (Eddy) Adriaens, was born 21.09.1953 in the Flemish city of Aalst. He grew up with his parents and six brothers and sisters in the suburb of Terjoden. After finishing high school, he worked as a correspondent and assistant (sales) executive at a few local SMEs for 14 years. In 1986 he was recruited by Bacob Bank, and started as a relationship manager. After the bank’s merger with the Dexia Bank, he moved on to be an Electronic Banking Expertise Officer at Dexia, later renamed Belfius bank.