You are here: Products You Stole My Heart by Kristal Dawn Harris 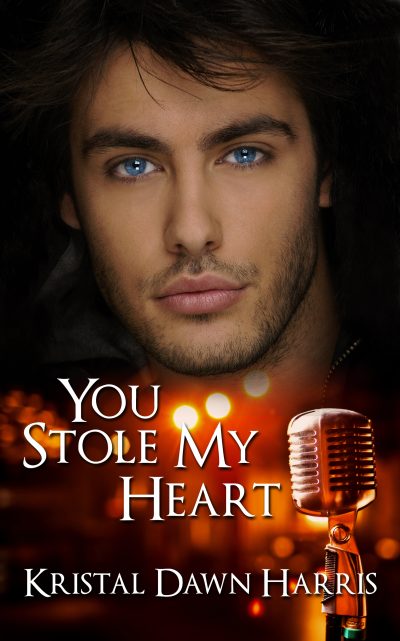 You Stole My Heart by Kristal Dawn Harris

Country music singer, Lucas Knight, was well on his way to the top when the woman he loved disappeared without a trace. Blackmailed and betrayed, Alessandra Moore fled town with a broken heart and a treasured secret. After thirteen miserable months, Alessandra returns to Tennessee only to come face to face with the man who haunts her dreams, and a love that can’t be denied. One night of passion shatters every lie, and Alessandra’s secret brings Lucas to his knees.

Can love overcome blackmail, betrayal, and a secret? Find out when Lucas and Alessandra come face to face in the novella, YOU STOLE MY HEART!

Kristal Dawn Harris is an award-winning, American romance author. She loves romance of any kind, but paranormal is her favorite. "The Rings of Faolan-Emeralds" is her debut novel published by The Wild Rose Press, Inc. Kristal writes paranormal, contemporary, and erotic in different lengths. She also self-publishes using Amazon KU. She currently lives in Ohio (go Buckeyes!) with her husband. She's been married 27 years and has two beautiful children. Kristal attended Miami University and finished a degree in Accounting Tech. If you see her out walking and notice she walks a little funny, it's because she does! In 1999, Kristal was diagnosed with Guillain-Barre syndrome and now wears drop-foot braces on her feet and legs, but that's okay. She's a survivor and proud of it! Kristal loves spending time with her family, singing, coin collecting, swimming, the beach, the mountains, reading, crafting and anything with a darker edge to it.

After finishing an Accounting Tech degree, I quickly realized I like words better than numbers. I've toyed with poetry most of my adult life, so it wasn't a stretch to write my first novel. I also write songs, so the idea of a musician, a man totally devoted to one woman, inspired the book.

Lucas narrowed his gaze searching the back of the room as his heart thumped hard in his chest. The need to see her one more time overrode everything. His eyes darted in the dim light to the wine glasses suspended over the bar, the bottles of liquor lining the shelves, and each person’s face, until he finally settled on her. Her eyes were downcast, and her blonde hair was shorter, resting against her shoulders, but there was no mistaking Alessandra’s haunting beauty. The breath stilled in his lungs while willing her to meet his gaze. Those blue eyes ripped his heart from his chest, and he needed to see them again. He wanted to know she was not a dream or what happened between them was not a lie.

His fingers moved of their own accord over the guitar strings. Her shoulders sagged. His lips barely grazed the microphone. The rise and fall of her chest gave away the deep breath she inhaled before gathering the courage to lift her face. Their eyes met across the room and time stilled for one moment. A small smile lifted the corners of his mouth. One tear slid over her cheek. The glistening evidence gave him the courage he lacked to sing what was in his heart. A haunting melody filled the bar as Lucas poured his feelings into one song.

Lucas watched and waited for a sign, anything, to let him know, she knew, who he sang about. He poured everything he had into the song, a song he wrote on the spot for her. She was the source of his inspiration. He sat up a little straighter when Alessandra slid off her stool, wiped her eyes, and bolted for the door. His fingers stilled on the strings, and his eyes narrowed to thin slits. He wasn’t letting her get away this time. He jumped off the stage and maneuvered through the tables and people gathered to hear him sing. Strangers tried to get his attention, but he didn’t hear a word because he was wholly focused on catching Alessandra before she disappeared again. He dropped his guitar at the bar before slamming into the door she just exited.