You are here: Products Xeno Tryst by Troy D. Wymer 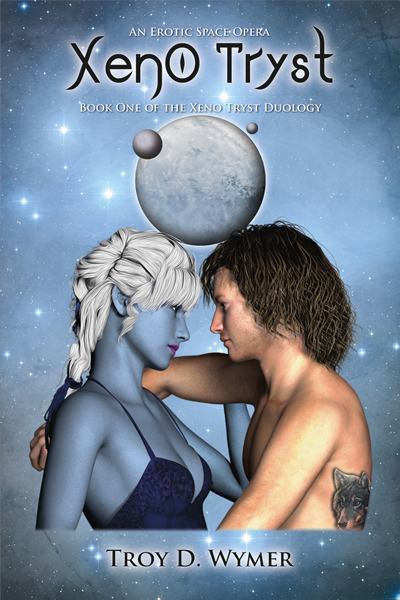 Troy D. Wymer started writing in 1984 when he was 15. He enjoys reading and writing science fiction novels. He also enjoys graphic and web design, drumming, trains and listening to various subgenres of metal music. After a long hiatus in writing, he continues to capture the imagination of readers with new science fiction stories.

I wanted to mix erotica with space opera. Although there are explicit sex scenes throughout the novel, they are secondary to the overall story arc. In this novel, I have strived to create rich characters, detailed settings, and a fascinating plot on a galactic scale. It is book one of the Xeno Tryst Duology.

“I’m Sierra Shalinsky, a sexual freedom advocate for human and Xenolfan relationships. I fight for the forbidden interspecies sex. I will have your back more than you can possibly know. In fact we have collected signatures from all over the Syrenthian Galaxy and given the petitions to Aaranix Tuvelless on Olf Teruda. A good friend of mine has led protests on Olf Teruda. I will be giving a sexual freedom speech on Red Jacket at the forthcoming Sexual Freedom Seminar. In fact, I want you and Gathin to attend,” Sierra said.
“Now that I think about it, your name was mentioned to us before by someone we met here named Rastall. He said he met you at the Sex Palace Theater on Salinarr Nevis,” Eslarr said.
“Okay, I think I remember him,” Sierra said.
She reached into her warm coat and brought out a small satchel. After opening the small satchel, Sierra produced four tickets.
“Here are two tickets to the Sexual Freedom Seminar. And these two are for a concert that will happen afterward at the same venue on Red Jacket. It will be at the Civie Arena. They are for the symphonic metal band Maranadda. I am also the vocalist for Maranadda. I really want you two to be there. I want nothing more than happiness and joy for you two. I am so glad that I have met you both. You two are the reason why I fight,” Sierra said in a passionate statement.
Sierra grabbed the glass of liquid from the counter that Mauve had set there earlier. She took a long drink, paused for a moment, and then finished the rest. Setting the glass down, Sierra handed Eslarr the four tickets.
“Like all of our Maranadda concert tickets, they are not for a specific show. Our tickets can be used at any of our future shows. If you miss one, you can catch us at another show,” Sierra said.
“Thank you so much…for everything. We will definitely be at both events. I would have never guessed you were all those things. You’re an amazing woman, Sierra,” Eslarr said.
“Yes, very amazing,” Gathin finally said.
“You two have inspired me to write a new song,” Sierra said.
The interspecies couple both hugged her and thanked her again.
“Oh shit!” Mauve exclaimed.
They all looked at Mauve as she gasped.
“What’s wrong?” Max asked.
“She drank the wrong glass. This is your glass of water,” Mauve said, sliding a glass across the counter toward Sierra.
“So, what’s the big deal? Weren’t they both water?” Sierra asked.
“No! Before you guys arrived, I just got done mixing a triple batch of my experimental Sipathrott aphrodisiac elixir drink. That wasn’t water!” Mauve said.
Sierra looked at the young woman with a blank face. She returned the small satchel of event tickets to her inner coat pocket.
“This shouldn’t be a problem. I’m usually pretty aroused anyway,” Sierra said.
“Oh, no, it will be a problem,” Mauve said, shaking her head. “You see, it’s a triple batch of Sipathrott, mixed with several other aphrodisiacs in a liquid elixir form that I was experimenting with. I was only going to try a small sip myself.”
“Oh,” Sierra said. “How long before it kicks in?”
“Probably in thirty minutes,” Mauve said.

Be the first to review “Xeno Tryst by Troy D. Wymer” Cancel reply