You are here: Products WTF by Tim Rees 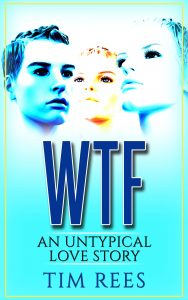 Note* There is a lot of romance in this book, but it is contemporary and is focused on 19 to 21 year old characters. The sex is explicitly detailed, but not gratuitous. The story deals with adult themes.

A twenty-one year-old SAS-type soldier finds himself crashing from one drama into another as his life is turned upside down. WTF is an intimate portrait of a young man seeking love set against a military background cluttered with national press headlines.

WTF will be considered controversial by some. Many scenes contain explicit sex. One character expresses strong opinions with regard religion.

Tim lives in Wales, UK, and is currently writing another novel.

As an ex soldier who’s experienced war, the main inspiration is the question I asked myself: if I defend the country and kill I get a medal pinned to my chest, but if I defend a girlfriend and kill I’ll very possibly find myself charged with a crime. And then the underlying theme I wanted to look at is pacifism. If a pacifist’s life or family are threatened, how quickly do they cease being a pacifist and scream for help, or do they really turn the other cheek? And then I have a young man in love and his hormones are racing, how far to I take the sex? I found writing convincing sex a real challenge and I always enjoy a challenge, thus the story evolved into drama with many facets, which is always a true reflection of life…

Be the first to review “WTF by Tim Rees” Cancel reply