You are here: Products Work For It by Allyson Starr 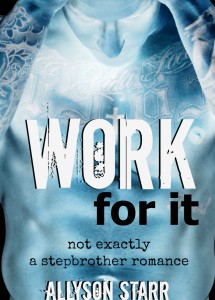 Work For It by Allyson Starr

Not exactly a stepbrother romance. I’d never fall for the bastard. More like a challenge—and I’m going to win.

My stepdad left me and his son an inheritance. Sort of.

Whoever needs it most gets the money. I trust you’ll do the right thing.

That’s what the will said. Had he ever met his son? Bret’s done nothing but make my life miserable since we were kids.

I have no job, and I’m up to my eyeballs in student loan debt. Bret’s been on tour in Europe with his heavy metal band for the last two years. He still has the nerve to cry poor mouth and says he’s going to make me work for the money.

My stepbrother is a sick, twisted, sinfully hot bastard… and I’m going to do whatever it takes to get that money.

Warning: Contains adult everything. Don’t tell my mom. It’s all for a good cause—the almighty dollar.

Allyson Starr has a dirty mind and she decided to make good use of it. She likes her music loud, her men hot, and her stories scorching. Sightings have been reported around Las Vegas, but Allyson thinks of herself as a gypsy soul. She loves hearing from readers!

Gemma and Bret popped into my head while I was stuck in traffic one day, and wouldn’t leave me alone until I told their story. They were a hell of a good time to hang out with.