You are here: Products Wolf’s Blade- The Paladins by Clare Dargin 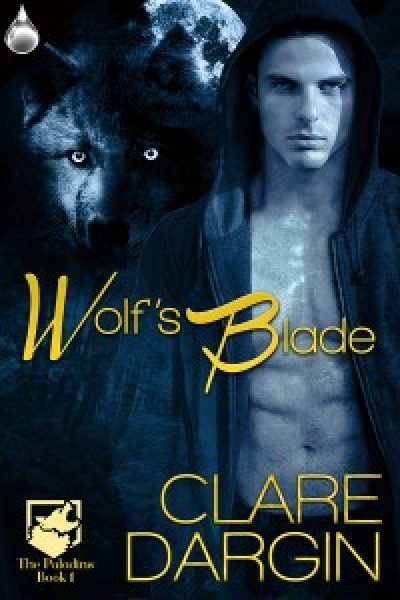 Samantha Dixon rescues a wounded wolf shifter in the woods near her home … and unwittingly gets drawn into a dangerous game of cat and mouse with a murderer.

Callum Blake is on the trail of an evil man who would be king of all wolf kind, no matter the cost … it’s up to Callum to stop him. How can Callum fulfill his duty to protect his pack and save the woman who is destined to be his mate?

I thought it would be intriguing to discover what the heroine will do when she finds out that not only is he a wolf but he has a darker side of him too that could potentially risk both of their lives. I believe it raises the stakes for all the characters involved while increasing the romance’s intensity.

Callum Blake growled and grabbed his forearm. He opened his clenched fist as the nails on his hand morphed into long dark claws. He gritted his teeth and closed his eyes as he fought the urge to shift. He pounded the tree and glanced up at the night sky and prayed in agony to the wolf goddess. He pleaded for help. He’d take anything she had to offer if it would provide even the smallest amount of relief.
Nothing. The pain continued. He shook his head and grimaced in an attempt to remove the fog that was starting to shroud his mind. He silently cried out to her again.
Why are you silent? You’re the reason I took this mission and now you’re allowing me to suffer?
His frustration mingled with his physical pain, adding to his misery. The beast fought its way to the surface. He opened his mouth and howled. A mixture of a roar and a yell, it relieved some of the tension within him, but it did not drive away the urge to shift. Leaning against the tree, he dug his claws into the bark, burrowing deep grooves as he exerted his strength against the muscle contraction. His pulse pounded in his ears as sweat poured down on his face. Unlike his wolf self who resided peacefully inside of him, his lycan did not have the same kind of placating nature. It yielded only to the strongest of commands exerted to it from his mind. It was supposed to live in harmony just as his inner wolf, but it refused.