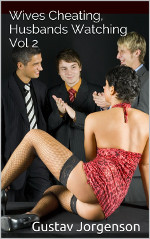 Gustav Jorgen made his first fortune in asset management. He is happily married with three children who have grown up and become professionals. His splits his time between New York and London. He enjoys yachting and bridge.

Older women often feel that men are paying more attention to younger women, so seeking attention from other men might be a way for them to build their self-esteem. Of course feminism dictates that a woman base her self-esteem on her own worth, and that is a noble and modern aspiration. But on some level, we all get a boost from the interest of the opposite sex. (This is more pronounced in heterosexuals admittedly.) A loving husband understands these urges in his wife, but these stories delve into what happens as that attention seeking becomes a slippery slope and descends into adultery before the husband’s very eyes.