You are here: Products Wittingly Seduced by the Dashing Duke by Eleanor Banfield 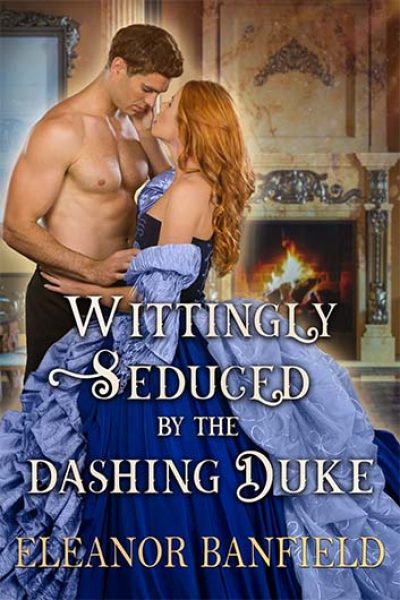 Wittingly Seduced by the Dashing Duke by Eleanor Banfield

He is holding her in his arms, after losing her forever.

Aching from her mother’s abandonment, Rebecca Atkinson, daughter of the Duke of Astonbridge, must be strong for the sake of her bereaved father. When a letter arrives, she has to travel north and collect the pieces of her mother’s mysterious past.

Having lost his wife, the only thing that keeps Aaron Darry, the Duke of Forney, alive, is his daughter. But his mother’s sudden death unsettles his quiet life and forces him to confront an unexpected peril: a lady that arouses his utmost desires.

Rebecca and Aaron fall for one another like a lightning bolt; instantly and catastrophically.

Before long, secrets are exposed, an arranged betrothal is unveiled, and a series of attacks threaten Rebecca’s life. When Rebecca gets trapped in a burning building, Aaron is transferred instantly to the night his wife died. This attack might be the last…

One would expect that Texas-born Eleanor Banfield would have been fascinated by Western Novels. But no! The irresistible Lords and seductive ladies from the Victorian and Regency periods won her over!

Growing up, her rebellious nature would always find her riding her horse or lying under a tree, getting lost in one of her favorite regency historical romances. Always itching for adventure, she was only sixteen when she decided to write her first story.

As soon as she finished school, she studied literature which soon became her passion. When she’s not writing, Eleanor enjoys spending time with her husband, doing Pilates, and baking… not necessarily in that order! She also identifies herself as the biggest tea fan!

Her wild imagination promises to throw you back in time, into a world of passion, scandals, and intrigue. Allow yourself to be seduced…

“Why?” she screamed into the emptiness of the forest. Her voice echoed under the clear, blue sky. The day was sunny, as if mocking her dark soul. The radiance of the sunlight travelled through the thick foliage and warmed her skin. She welcomed the nice feeling, allowing the sun to dry her tears.

She continued walking aimlessly between the giant trees that looked down on the muddy soil. Autumn had well progressed and the trees were naked, having shed most of their leaves that were now piling up on the ground.

Mud and wet leaves stuck to her shoes as she walked. The tail of her long dress rustled with her every move as she made her way toward the river. She staggered while she walked, but managed to make it halfway there.

Her eyes shed tears in a relentless rhythm and obstructed her vision. Her breathing came out with difficulty; her throat was tight and she struggled for air. Her entire body was convulsing now. A relentless tremor overtook her and she knew she had to stop. She paused for a single moment and leaned on the thick trunk of an old tree. The decay of the wood was obvious from a closer look and a couple of splinters pierced her skin, releasing tiny drops of blood that ran from her palms.

But she felt nothing.

She could not feel pain anymore; not after the excruciating agony of her soul being torn apart by betrayal.

This was all; she had turned the paper back and forth, searching for something that wasn’t there. An explanation, an apology. Nothing. There was nothing there that could indicate this was a mere jest, that someone was playing with her and everything would be over soon. The realization cut through her like a sharp blade in flesh.

She had gathered her stuff and burst out of the inn. It was just a small construction with two floors that served as a tavern for the locals and an inn for the travellers. This was their meeting point. It had only been described to her but she wouldn’t miss it among a thousand others. It was the place that held all her hopes and dreams, but had soon turned into the debris of her destruction.

The innkeeper had yelled after her – she could still hear his voice in her head, but there was no stopping her. There wasn’t one since she had left everything behind mere days ago.

She had ran as far as her legs could take her, struggling to drown the memories that came rushing in her mind.

She had made it to the forest at the northern end of the small town where the streaming river interrupted the rows of trees. The fast-flowing stream cut the old forest in half and a stone footbridge was located at the end of the sharp bend, about fifty feet from where she was standing.

She thought about it at once. At the sight of the torrent that whipped the banks of the river with violent force, she knew the answer to her torture.

She pulled herself up, supporting her body with her hand rested on the trunk, and straightened her slender figure. The hood of her cloak had slipped back revealing her burning red hair that fell over her shoulders in a cascade of thick curls. She snatched her dress and lifted it a tad, so she could walk unobstructed, and made her way toward the river.

Standing in front of the river now, she watched the stream move. In spite of the sunny weather, the winds at this part of the town were strong. After a few days of rain which she had witnessed on the road with the carriage, the water levels had risen and were now streaming ferociously.

Tiny drops began splashing her dress. Her proximity to the water left her a few feet from an end that was well-deserved and just. The water wetted her dress a little more in every rapid batter but she firmed her mind around her decision.

There is nothing left for me.

In a single move she had destroyed every little thing that was important to her. But she had been warned.

The night she left, she was naïve enough to think that no one had suspected her endeavours. But he was waiting for her. The door was slightly open and he had an unobstructed view of the large staircase. The moment she stepped in the great hall, and the clatter of her shoes cracked the silence of the massive room, he neared her without her realising. She jumped at the sound of his deep, hoarse voice.

“Did you say your goodbyes, then?” he had asked, irony evident in his voice.

“You startled me,” she said. This was the only thing she could think of to reply.

“Do not do this, I implore you,” his voice cracked under the emotions overflowing him.

“I cannot,” she had said and turned to the door.

What an irony! How fair life was! The same words she had used to escape her past were used against her to thwart a future that was never meant to be.

She took one more step toward the river. She was now standing at the edge of the eroded banks that had a sharp, abrupt curve between the soil and the gushing stream. One more step.

She looked at the river rocks emerging from the water and made some quick estimates; if she was lucky, she would be crushed on one of them before drowning. She dreaded the thought of water slowly filling her lungs, tormenting her to the very end. But a fatal blow from a jagged, robust rock was highly welcomed.

She gathered her strength and attempted the final step.