You are here: Products Witch Hunt by JR White 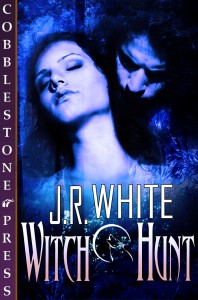 After the bloody murder of her brother, Rei finds herself on the run from the coven that killed him. A powerful Earth witch, Rei searches for a natural well of magic to avenge her brother’s death, even if it costs her life. However, standing between her and her goal is an alluring wolf.

Aidan never took the time or interest to look for his mate, but when the young witch shows up on pack hunting grounds his solitary life is turned upside down. Now, he must find a way to protect his pack and the woman that fate has handed him.

In a world where witch and werewolf merge, this odd couple must fight off challenges from both within and outside of themselves. Can they fight off the coven of blood witches who threaten not just Rei, but Aidan’s entire pack? Can Rei accept the help that Aidan and his pack offer or will she try to brave it on her own?

J. R. White has been telling stories for as long as she can remember. After her marriage in 2008 she found the freedom to dive headfirst into her personal world of fiction. Currently she lives in the Upstate of South Carolina with her family, where she fills her daughter’s head with fairy tales.

I was inspired to write this book one night when I was walking in circles trying to work on another story. I was outside and there was a bright moon. I just started wondering what would happen if a witch met a werewolf in a way that had little to do with vampires or other supernatural elements. My love of camping inspired a lot of Rei’s life before the conflict in the book started, and a country lifestyle inspired Aidan’s lifestyle and place within his pack.

Prologue
High above the ground of man, the moonless night sky was calm. Bright stars dotted the darkness, and peace had settled. Suddenly a scream shattered the silence, and startled birds flew from the trees. The scream had rung out from a young woman far below, standing by a large flickering fire. As quickly as the scream had burst to life, a swift hand struck the woman across the face.
Rei fell to the ground, her voice silenced. The coppery taste of blood filled her mouth, and her world blurred over. As her eyes began to focus, Rei saw her brother only a few feet away. Blood rushed from his throat, and Rei, with her hands bound behind her back, could do nothing but watch. She could barely even make out the voices chanting around them.
The dark-clothed man who had hit her put his hands high in the air, mirroring a woman who held a bloody knife above her head. Rei ignored their ritual and struggled to her brother’s side. Leaning her forehead to the top of his, Rei whispered, “Richard, I’m sorry.” Tears streamed down her face as she felt her brother’s life force racing from his body.
Surrounding them, a dozen people called to the natural power in Richard’s blood. They pulled it from every drop, and the High Priestess who held the knife was funneling most of it into herself. Rei looked up at them and then back to her brother. Richard’s dark blue eyes found hers, and suddenly an image of a feather fluttered through her mind. In that instant Rei knew what she had to do. She felt the magic forming in the circle growing and knew that once they were finished with Richard they would turn to her. For Rei, death was one thing, but being killed to increase the power of a blood cult was beyond reasonable.
Rei needed no words to steal her brother’s magic back from the air, but her heart ached at the sin. Closing off the guilt, she began to reach out her magic. The blood that had swelled at her busted lip was enough. Blood called to blood, and Rei simply called out to the power of her brother. For an instant a battle between the will of the coven and Rei raged, but the love of her brother and the guilt of his death won. Rei’s head snapped back, and she stared blindly at the star-speckled sky. Behind her the High Priestess dropped her arms, breaking off the war of magic and dashed toward Rei, ready to drive the knife into her.
Time slowed as Rei began to stand. Her knees began to unbend and change. She felt the texture of her legs begin to roughen, and in the flicker of the fire, feathers began to ripple over her skin and clothing. As her arms shrank and formed hollowed-bone wings, the rope around her wrists fell to the ground. When time returned to normal, Rei was a small bird flying upward into the sky. Below her, the knife the High Priestess wielded stabbed into a small pile of cast off rope.
Rei heard a rage-filled scream from below her and then the stern command from the High Priestess, “Spread out! She can’t stay in that form long!”
High above the coven, the feathered Rei skimmed across the once again silent and still night. She felt fear gripping at her throat, threatening to weaken the power her brother had given her. Rei swallowed back her grief and flew onward.
Below her she knew the coven was scattering through the forest in their search. Rei was happy that the coven had not stolen the ability to change their shape. Shape changing was a rare gift for a witch. It may have been the only advantage she held over them, but holding a different form was hard. Speeding her way over the trees, Rei tried to focus on the image of the bird she had formed. She forced her will into the shape and prayed she could hold it long enough to put many miles between herself and the blood witches.
Thoughts of her beloved brother filled her mind, and it was only the determination of his power that had forced the image of the small bird into her mind. Quickly the face of her brother was morphing into the bird to help her hold the form long enough to escape. Richard, I’m so sorry, Rei whispered in her mind.