You are here: Products WishCraft by Savannah Kade 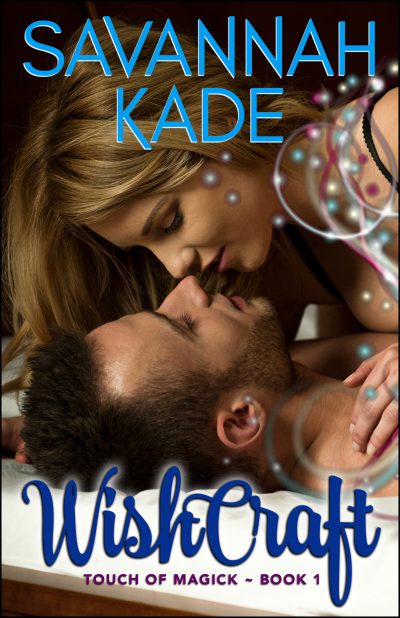 Delilah is an eighth generation witch living in Los Angeles, she’s dealing with a heartbreaking betrayal the only way she knows how: magic. Then she meets Brandon, and her *forget* spells don’t work on him, at least not the way they should. What happens when Brandon realizes what Delilah is doing? And what will he do when he remembers?

Savannah Kade grew up in East Tennessee and started writing when she was only 8 years old. It was a romance for the ages, but it will never see the light of day. She’s been writing ever since and fighting for heroines who are quirky but not dumb, heroes who are real men, and for love stories that are more than just a cute trope. She now lives outside of Nashville with her amazing husband and 2 kids. She can usually be found working on her next novel.

I wanted to write a book about witches in the real world. I wondered: if you had those powers, how would you hide them? Would you? Who would you tell?

These witches are just like the rest of us, only they get better parking spaces and sometimes case a love spell that goes horribly awry.

Delilah gazed at the man beside her, watching his chest rise and fall in rapid waves, much like her own was doing. She let out a breath.
The universe was right. Tonight had been her night. The olives had not deserved the way she’d cursed them.
It was midnight. Perfect timing. If she got him out of here and then passed out within twenty minutes, she could catch a neat two hours of sleep before she had to get up to go to work.
As her breathing and his slowed to a more normal rate, she moved into action. Delilah kissed her fingertips, imbuing her touch with an extra nudge, leading him to agree with her. “Thank you. That was fantastic.” She caressed his upper arm with a sweet stroke, intending him to absorb both the compliment and the suggestion a little more deeply. “But I need to get some sleep now. I have to get to work at three.”
He rolled to look at her, his eyes showing that he’d been affected by the simple magick. He smiled. “I should get some sleep, too.”
However, instead of standing, he reached for the covers, pulling them all the way up and over both of them before she could get her bearings. She tried again.
“No,” She kept her voice soft but steady and firm, “I need to sleep alone. You should go.”
His laugh rumbled low in his bare chest; he was still not agreeing. “You don’t need to sleep alone, and I’m too tired to move.” His arm came up and around her, pulling her closer and alarming her more.
Surely he wasn’t immune to her magick.
That would mean that he was stronger than her. She would have sensed that right from the start.
Again she pushed a little extra power into her touch and shoved against his chest, still barely budging him. “I have to go to work at three. That’s just a few hours.”
Delilah hadn’t even added a kick to her words. She was a little panicked by his nonchalance, which was enough to make her forget the magick that should be second nature. She was functioning on pure logic.
Unfortunately, logic didn’t work on him either.
“You shouldn’t have invited me home if you have to work that early. The room is spinning like I’m drunk, so I can’t drive. And I don’t think you really go to work in a few hours anyway. Who starts work at three a.m.?”
He snuggled in a little deeper under the white fluffy comforter and let his eyelids drift shut.
Fine, if he wanted to sleep, he could just sleep through the forgetting.
As his face relaxed, Delilah rolled herself up to sit on the side of the bed, relaxing now that she had a Plan B. With a deep breath to re-focus herself, she lit the white beeswax candle again and pulled out a fresh stick of lavender, lighting the tips of the small white blossoms.
She woke him to hand him the smoking sprig figuring she would just push him out the door while he forgot.
But he didn’t go.
Brandon sat up, coming awake with the burning lavender in his fingers. He frowned at it, crinkled his nose and blew it out. “That smells bad. Stop doing that.”
He handed her back the burnt blossoms and rolled over, tucking the covers under his chin.
What was wrong with him?
Delilah sniffed the lavender for herself. It didn’t stink. It wasn’t beautiful, but it didn’t produce a smell worthy of the faces he made.
She was startled from her wonderings of what the hell she might have done wrong by a soft snore.
The damn man was out like a light.
She should never have indulged in that second round with him. She’d worn him out and now what was she going to do?
Her shoulders slumped. She could burn the lavender and cast the spell on him. He’d forget about her and what they’d done. But he’d still be in her bed, so that was just fruitless.
After nudging and shaking him more times than she could count, Delilah gave up.
Fine, he’d believe she had to be at work at three a.m. when she woke his sleepy ass up at two fifteen.

Be the first to review “WishCraft by Savannah Kade” Cancel reply