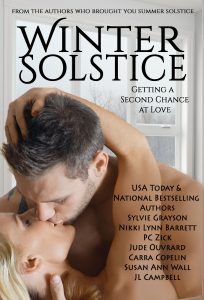 J.L. Campbell is an award-winning and best-selling author who writes romantic suspense, women’s fiction, new and young adult novels. She has written thirteen books, four novellas and two short story collections. She is a certified editor, who also writes non-fiction.

We are a group of romance writers who put together the box set Summer Solstice in June 2016. Based on the popularity of that set, we decided to pull together this box set for the Winter Solstice to celebrate a second chance at love romances.