You are here: Products Winter Fire by Kathy Fischer-Brown 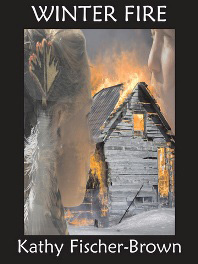 When Ethan Caine pulled the unconscious woman from the half-frozen creek, he had no idea that his world was about to explode. Dressed in quilled doeskin of Iroquois design, she stirred up dark secrets from his past. At the same time, she was everything he desired. But she was more Indian than white, and on the run for murder. He needed to know the truth. He needed to find it within himself to trust her.

Banished by the Seneca Indians who had adopted and raised her, ostracized by the whites in the settlement, Zara Grey wanted only to be accepted. “Ethancaine” treated her with kindness and concern. It was easy to trust him. But her Indian ways disturbed him, and in her heart she would always be Seneca.

“Kathy Fischer-Brown weaves a tale of intrigue set to a backdrop of history and romance. The story moves along, keeps you interested right up to the end, and the love story between Zara and Ethan is tender and heartwarming. The author does an excellent job of weaving in the cultures clashing against each other, the unfounded prejudices of societies that don’t understand each other, while still keeping the focus on the romance. This is a touching story, the characters are vivid, the history is accurate, and the details really give the story a sense of place.”

When not writing, she enjoys reading, cooking, photography, playing “ball” with the dogs, and rooting on her favorite sports teams.

And so the story of Zara Grey began to take root in my imagination. The resulting novel, Winter Fire, went on to become a Golden Heart Finalist.