You are here: Products Winning Back His Wife by Gwen Hayes and Zoe York 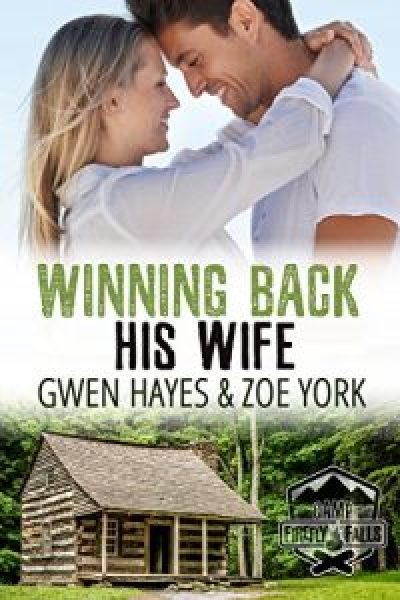 Winning Back His Wife by Gwen Hayes and Zoe York

*Gwen also refuses to behave and get a proper author photo taken. Ob

I saw an article about a summer camp for grown-ups and thought it would be an awesome setting for romance. So I began gathering my writer friends and we built a shared world with interconnected stories at Camp Firefly Falls

“You couldn’t just ask me? Instead of giving me divorce papers, you couldn’t have just asked me here?”
“Would you have come?” She twisted her hands into the front of his shirt and tugged him toward her.
It was the closest she’d come to being in his arms in six months and at the first whiff of her familiar scent, he knew it wasn’t going to be enough to just be close. His arms shook with the need to haul her against him and never let her go. “You made it crystal clear that I wasn’t welcome.”
“Because you kept trying to convince me to sell this place!”
“Because it’s a money pit,” he growled back, unable to resist the now familiar fight. He couldn’t understand why she’d walked away from their life for a complete disaster. Why she’d chosen a total mess over her husband. “Because if you want to do something different with your life, fine, but why choose certain failure?”
She gasped and shoved at his chest, but no—she’d pulled him close. Now he was right there, and he wasn’t backing down. “Take that back,” she whispered.
“It’s the truth,” he said roughly. “I’m never going to lie to you.”
“It’s your opinion. I don’t share it. I have a plan, which is sound, if you’d ever deigned to listen to it.”
That pulled him up short. “If I agree to listen to it, will you agree to hold off on the divorce?”
“You think that’s a fair trade?” She huffed into his chest. But she wasn’t shoving him away.
He bowed his head and breathed in the scent of her. His Heather had always been fresh and sweet. Always would be. He’d missed her like this, in his arms, all curled up. “No. I probably owe you a hell of a lot more. But it’s a starting point.”
“You’ll understand if I’m doubtful,” she said, her words muffled now as her mouth found his neck.
Painful longing punched him in the gut. God, yes, he wanted her kisses. Wanted all of her, immediately and constantly, but that wasn’t talking.
“I understand completely.” His words were rougher now, shaking with restraint that he hated. He didn’t want to hold back. He stroked one hand into her hair, letting himself have that slightly more intimate touch. The silky strands slid around his fingers as he held her tight. “But I can prove to you that I’m interested in every last detail of your plan.”
She nodded, and when she spoke, her tone surprised him. It sounded like she believed him. “You can”
Holy hell, did that give him hope. He tightened his grip on her hair, just enough to tug her head back. He gave her a hard look. “Yes.”
Her eyes widened and her lips parted. She slowly exhaled, then smiled. “You came.”
“I did.” He curved over her, his mouth aching to cover hers.
“We’ll talk?” Her breath puffed against his lips, shaky and warm.
“A lot,” he murmured, knowing they needed it. But they needed this even more.
“When?”
“Later.”
She pushed up on her toes, closing the last quarter inch between their bodies, and he opened for her, because he wanted to, hell yes, but the need was deeper than that.
He’d never been able to say no to her.
Not for kisses, or dreams, or even a separation when things got so bad she couldn’t see another way to deal with their impasse.
If she’d just asked him about the camp, he’d have found a way to support that, too. But she’d done it all without him, then served it up as an angry ultimatum.
The bitter memory needed to be wiped away. He deepened the kiss, demanding more from her, but the more she gave, the hungrier he got.
She tasted like tea and sweetness. Her tongue was quick and warm and teasing as it tangled with his—so familiar and yet new, too. She’d always been confident when making love, but this was daring and willful. A new taste, and he wanted more of it.
He tugged her hair again, angling her head back so he could taste the skin of her neck. The delicate muscles worked beneath his mouth as she clung to him, letting him explore for a minute, but then she tugged back.
“More kisses,” she whispered. “I’ve missed that so much.”
It wasn’t quite “I’ve missed you,” but it was a start. And it wasn’t that he doubted that fact. He was just a bit needy to hear it. To know that her heart had been broken just as much as his, and she was just as fragile now…