You are here: Products Wild Ways by Tina Wainscott 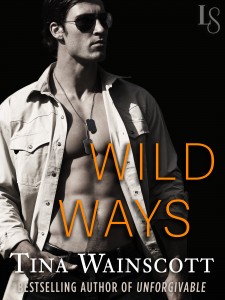 The Justiss Alliance returns in Tina Wainscott’s novel of outlaws and daredevils, as the hunt for a missing woman unites two brave souls in electrifying desire.

When her sister, Diana, rides off into the sunset with a member of the Kings of Chaos motorcycle gang, Mollie Reagan is beyond worried. Two weeks later, a desperate call from Di that is abruptly cut off launches Mollie on a dangerous search.

Before Julian Cuevas receives his first assignment for the Justiss Alliance, he finds one of his own: a beautiful, courageous woman looking for a sister lost in the dark world of violent outlaws. Soon Mollie’s mission is Julian’s mission—one he’d give his life for.

Mollie is used to going it alone. Trusting one stranger is hard enough, but Julian brings a whole team from the private “security” firm he works for. The sexy SEAL is living proof that some people can be counted on–even if her savior is a well-armed, world class sniper riding in on his Harley.

As Jaime Rush, she is the author of the Hidden series, featuring humans with the essence of dragons, angels, and magic, and the award-winning Offspring series, about psychic abilities and government conspiracies. Altogether she has published twenty-eight novels and five novellas. www.jaimerush.com.

I watched an Unsolved Mystery many years ago about a young woman who disappeared, and they thought she’d been kidnapped by a motorcycle gang. This woman’s mother went to such brave, extreme lengths to find her daughter, and that search, though ultimately futile, touched me and inspired me.

Two guys walked out of the bar, squinting in the sun as smoke and now louder music poured out with them. Their black vests identified them as Vipers, with the logo of a bike’s profile, the tires made of the snake’s body. They slowed as they saw Mollie, and Julian wandered over and slung his arm around her waist and pulled her close. He greeted the two men, who kept on going to their bikes. As soon as the engines filled the air with sound, Julian leaned close to her ear. “Be easy with me.”
She turned, finding the rasp of his stubble rubbing against her cheek. “What do you mean?”
“You’re my BOB, remember? My girl. We probably live together and have had sex a hundred different ways.”
Her body reacted to those words, adding the image of him lying on the bed, sunlight slanting across him—
“That’s what you want these guys to think, to see—that you’re mine,” he said. “Not tonight or for a couple of hours, but mine. When they look at you like those two just did, I’m going to claim you.” His hand tightened on her waist. “You need to move into me to show them there’s no question about where you belong.”