You are here: Products Whom Shall I Marry… An Earl or A Duke? by Laura A. Barnes 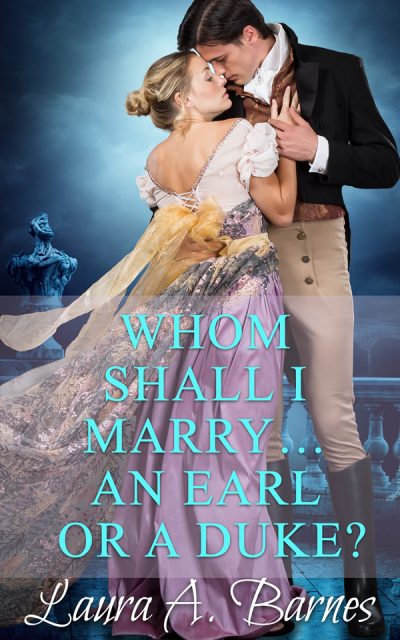 Whom Shall I Marry… An Earl or A Duke? by Laura A. Barnes

An afternoon spent in disguise leads to a passion that ….

She wanted to explore the promise of his kiss. He wanted to persuade her to become his mistress. Will a case of mistaken identity lead to a marriage of love?

While trying to prevent her friend from a scandal Sophia Turlington becomes entangled in her own. As she waits for her friend in a brothel, a duke mistakes her for a harlot. When he requests an arrangement, Sophia decides to explore the passion he awakens in her soul. Her only stipulations for the affair are a mask, one week, and he must never discover her true identity. Can Sophia give him her heart and walk away as if their time never affected her?

Alexander Langley’s life as a prominent duke will soon come to an end unless he can acquire a duchess whose family can support him through a scandal. When he meets a violet-eyed temptress that awakens his every desire his search comes to a halt. As they explore their passion, he loses his heart to a woman he can never marry. Will Alex put aside his status in the ton for a love to last a lifetime?
Throughout the season Lady Sophia Turlington and Alexander Langley, the Duke of Sheffield’s dislike for one another is known to all. A chance encounter throws them together as Alex and ‘Violet’. After their time ends, Sophia wants Alex to see her for herself. If not, then she might as well accept her friend’s marriage proposal. Can Alex overcome Sophia’s deceit? Or will his need for revenge destroy the love she holds for him?

Whom Shall I Marry… An Earl or A Duke? is the second novel in Laura A. Barnes’s steamy historical romance series. If you enjoy a story filled with passion and secrets set in Regency England, then you must read Sophia and Alex’s journey toward love.

Unlock Whom Shall I Marry… An Earl or A Duke? to read the next book in Laura’s Tricking the Scoundrels series today.

I am the author of The Romancing the Spies Series. When I am not writing, I am spending time with my family. I love reading books on lazy afternoons and late into the night. Anytime really. Married twenty-nine years to the love of my life, we have three wonderful children and two sweet grandbabies. Besides writing, I have always wanted to travel. In the last few years, we have gotten our passports stamped in England, Scotland, and Ireland. We are hoping to add Italy to the list soon. My debut novel is Rescued By the Captain.

When I wrote the first book in the Tricking the Scoundrels series, Sophia and Alex's chemistry sizzled off the pages. I knew I needed to give them their own story.

Sheffield cornered Sophia against the tree tucked in the dark recesses of the garden.

“Well, I suppose you will do.”

“The kiss I was promised.”

“I have not promised you a kiss.”

“No, you did not. However, your friend lured me into the garden to compromise her. Since she has broken our engagement to trifle with Wildeburg, I have been left abandoned. Therefore, because a kiss was promised, somebody must fulfill the bargain. So, that leaves you.”

“You are absurd, no gentleman would suggest such an offer was made.”

“I’m not feeling very gentlemanly at the moment, since Lady Sidney passed me over for a mere marquess. As her best friend, Sophia, it falls on to you to console me.”

They were hidden in the shadows. Sophia tried to sneak around him, but his body surrounded hers. His hands rested on the tree against her sides, trapping her between the rough bark and his hard body. She gasped as he bent his head to press his mouth to hers. They were warm as they coaxed her lips apart. When his tongue slipped inside, she tasted the whiskey on his breath. As his tongue stroked hers, Sophia felt herself softening into him. Without realizing her actions, she wrapped her arms around his neck drawing him in closer to their kiss. She heard his moan vibrate off her lips as Alex pulled her away from the tree and enclosed her into his arms.

He only meant to scare her. But his bruised ego fought against the moral code of a gentleman and he'd threatened her with a kiss. If it were not for her interfering, he would still be engaged to Sidney Hartridge. Instead he was once again in the market for a bride. He knew Lady Sophia Turlington aided Wildeburg with winning the affections of Lady Sidney. For that he decided to make Sophia pay. A kiss would warn her against trifling with his life.

How was he to know she could kiss like a skilled courtesan? Her lips should be illegal. He caught her gasps in between his moans. Each stroke of his tongue against hers lighted a fire inside his body for more. He needed to pull back. Since he only meant to frighten her, he didn't want it to go any further, or be burdened with her for a wife. It would appear his search would need to begin again. With a reluctance he couldn't explain he separated himself from her.

As Sophia stood there wild-eyed and gasping for air, he noted her hair had fallen around her shoulders. She presented quite a picture. If she were any other woman and not a vindictive shrew, he would finish what he started. It was a pleasant evening for a tryst in the garden. But Lady Sophia didn't meet his requirements for a duchess. Then there was her mother. He shuddered as he imagined his life married to this lady with her fire-breathing dragon of a mother always present. No, thank you.

He stood before her, raking his eyes over her appearance. With the look of displeasure upon his face, he must have concluded that she didn't stand up to par. Sophia’s hair tumbled around her shoulders and she knew her dress was wrinkled from being wrapped in his embrace. However, her dignity was still intact. She lifted her head with pride and raised her chin. Where in return he cocked his eyebrow in disapproval and smirked at her. Then had the audacity to turn and saunter away, but not before he drawled a snide remark.

“Not what I expected, but it will do.”

Be the first to review “Whom Shall I Marry… An Earl or A Duke? by Laura A. Barnes” Cancel reply