You are here: Products Who Needs Love? When you have a cyborg lover… by Vickie Valentine 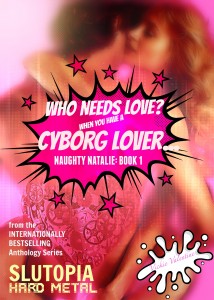 Who Needs Love? When you have a cyborg lover… by Vickie Valentine

Love? A box of chocolates? Red roses on Valentine’s Day?

Valentine’s Day will never be the same again….

Naughty Nights Laboratory
San Jose, California
Saturday, February 14, 6969
“Seven perfect inches of erect male cock,” I whispered, stroking it lovingly with trembling fingers.
I’d really done it this time! Natalie Naughty – sexy scientist extraordinaire. That’s what they would call me after my latest invention became a galactic sensation. But before I shared the exciting news, I needed to perform a series of tests. Being a sex scientist definitely had its benefits.
Jack lay perfectly still on the table before me. His features stood out against the black surface and his skin felt as smooth as the epoxy resin on which he rested. I’d had the table made especially for him in order to accommodate his height. Damned expensive! But it was well worth it.
He was stunning from head to toe. Broad shoulders. Smooth chest. Tight pecks. Taut abs. Large hands. And a mouth-watering penis tucked between his muscular thighs. My panties dampened as I imagined the thick head thrusting in and out of me. The slight curve of his cock was ingenious–sure to stroke my G-spot and elicit a screaming orgasm… every… single… fucking… time.
Licking my lips, I glanced over at my assistant. Mark Matters folded his arms and leaned casually back against the counter across from me. A smirk tugged slightly at the corner of his sensuous lips. “Damn shame if you ask me. Poor Jack. If he could talk right now, he’d beg you for a bigger dick. Go big or go home! You’re a cruel master, Natalie. Why not twelve inches?”
“Seriously?” Lifting my brow, I stared at him and sighed. Men. They were clueless when it came to pleasuring women. “Because the average vagina is three to four inches long. If aroused properly–and that’s a big if where most men are concerned–the vagina expands to twice that length.”
“And your point is?”
“You may dream of having a foot long dick,” I said, planting my hands firmly on my hips to refrain from smacking him upside the head, “but most women don’t dream of being impaled. Twelve inches hurts. You’ve single-handedly proven why I decided to invent Jack.”
He pushed off the counter and sauntered around the table until he stood directly behind me, caging me in with his hands braced against the table. The warmth of his body permeated my thin lab coat and silk dress as he pressed his chest against my back. Warm breath caressed my neck as he whispered, “It only hurts if the man is an asshole. Let me prove my point. Tonight. My place. You and me.”
Did he ever give up? After more than a handful of rejections, I would’ve expected him to move on. Testosterone must run as thick as oil through his veins. I twirled around in his embrace, wrapping my arms around his neck. Perhaps I was taking advantage of the situation, but I wasn’t completely immune to his charms. Mark could be downright sexy–sometimes. And I was in a flirty mood…warming up for my first meeting with Jack.
“Are you claiming to have twelve full inches?” I asked, pursing my lips. “For that, if you show me yours, I might consider showing you mine.”
“Maybe not twelve,” he said with a wink. “But more than seven. That’s for damned sure. You don’t need a toy, Natalie. You need a real man. Flesh and blood.”
I snorted at his lame attempt to lure me into his bed. “Been there…done that…”
“Jack might stimulate your body, but can he stimulate your mind?”
“He can if you did your job right,” I said, arching one questioning brow as I lifted my hand palm up. “Well? Give me the chip. The moment of truth has arrived.”

Be the first to review “Who Needs Love? When you have a cyborg lover… by Vickie Valentine” Cancel reply