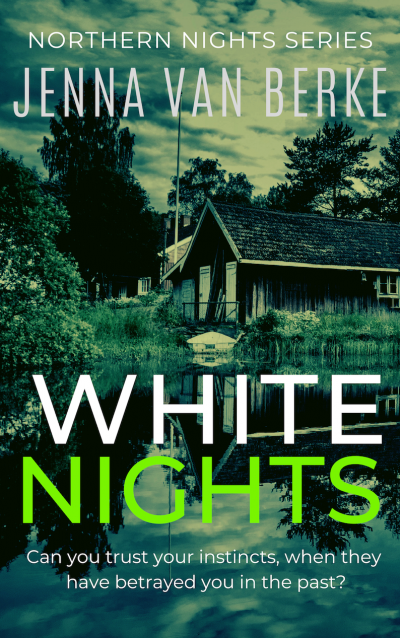 After leaving her abusive husband, PhD student Litza York is looking forward to a change of scenery. A year in a tiny village in eastern Finland, researching the rare Saimaa seal is just what she needs.
Meeting handsome park ranger Niilo Vuorikoski comes both as a welcome surprise and a challenge: How can she trust her instincts, when they have utterly failed her in the past?
But her emotional struggle gets overshadowed by a more immediate concern, when someone starts poisoning the object of her study, bringing her favourite animal to the verge of extinction.
Both issues reach boiling point when Litza pursues a terrible suspicion, and finds herself in mortal danger…
GET A FREE COPY NOW!

Jenna van Berke loves Scandinavian mysteries, Nora Roberts, Margaret Atwood and everything in between.
Working in the hotel industry, Jenna has encountered innumerable honeymooners, cheating husbands and infatuated co-workers, providing her with ample inspiration for her romance and romantic suspense novels.
She moved to Finland several years ago with her husband and child.

1
“So, what’s the big news?”
“Wait, come on in first, will you,” Litza ushered her best friend to the kitchen.
“Oh, hi Felipe, I didn’t know, we’re having a party.” Litza’s brother was already waiting at the laid table.
“Hi Lola, late as always,” Felipe teased, giving her a peck on the cheek.
“Yeah, sorry, and you’re still rude as always.”
“Some things never change,” Litza commented, while she popped a bottle of champagne. The banter was still going on when she handed over the glasses, so she took a moment to watch these two of the three most important people in her life.
Like herself, her older brother Felipe had inherited their mother’s thick black curls, green eyes and greek nose. He was a somewhat shy and serious character, and the way he treated her best friend only showed how close they actually were.
She had often wished for the two to become a couple, but apart from a very drunk kiss many years ago, nothing had ever happened between them, and Litza was forced to acknowledge that it would most probably stay that way. Over the seven years they had known each other, Lola had become more like another sister to him.
Litza first met Lola shortly after moving to Portland, Oregon, to study biology. They had met through their respective boyfriends at the time, and while the boys involved were long forgotten, their friendship had lasted.
She still remembered the first time she laid eyes on her at a college party. Lola had been in the middle of a row with her boyfriend, and Litza was impressed by how the petite Audrey Hepburn look-alike did some very straight talking to her boyfriend, who towered over her by at least ten inches.
“Shut up now, douchebag,” Lola rammed her elbow into Felipe’s side and smiled at Litza, who had settled at the table.
“There are two things I’d like to celebrate with you tonight…”
“Two?” Lola interrupted, “I can guess one, but…”
“Can you please shut that blabbermouth of yours, I’m trying to listen to my sister.”
“You know, you guys behave just like an old couple. Why don’t you finally become one?”
“For the last time, Litza…”
“Number one,” Litza raised her voice, “since yesterday, I’m officially divorced and will receive a considerable sum of alimony…”
“Serves him right, that asshole!”
“And number two: I’ll be getting a scholarship to…”
“That’s awesome!”
“I’m so happy for you,” Lola rose to hug her.
“… Wait, it’s not what you think, it’s – I’ve decided to finish my PhD in Finland.”
“What?” Lola dropped back onto her chair. “Did you say Finland? That’s like on the other side of the planet! What the hell do you want in Finland?”
“I’ll do research on the situation of the Saimaa ringed seal.”
“Can’t you do that somewhere closer?”
“No, douchebag because they exist only in that one lake in eastern Finland.” Felipe raised his glass, “Cheers, to your future! I’ll be sure to visit you over there sometime.”
Litza had already told him about the project, and although he still felt responsible for his sister, and didn’t like to see her go, he was sure the change of scenery would do her good after what she had been through.
“Cheers,” Lola’s voice was clearly less enthusiastic. “I’ll come and visit too. But can someone please explain to the layperson since when seals live in lakes?”
“There are only very few freshwater seals, and the Saimaa seals are among the most endangered in the world, there are only about 380 individuals left. That’s why it’s such an exciting opportunity. And you know how I’m slaving here, with my supervisor who’s never happy and changing his mind every other week. But in Finland they’re very interested in my project, I won’t have to do all the dirty work I’m doing here plus they granted me the scholarship.” Litza patted her friend’s hand. “I’ll be back soon. If everything works as planned, I’ll only need another year or two…”

2
Three months later, Litza dragged her suitcase into her brand new home in Oravi, Finland, which the university had organized for her. It was a small, neat one-room apartment furnished with a kitchenette, a small table, two chairs, a queen size bed and a nightstand. Nothing fancy, but it had everything she needed.
The trip had been long and exhausting and even though it was only afternoon, all she wanted to do was sleep. But not before she had taken a shower.
The hot water eased her aching back muscles and she felt herself loosen up. Coming here was a big step forward for both her professional and her private life. She could hardly believe how much her life had changed during the last year.
Not long ago Evangelitza York had been Evangelitza Carlton, wife to a successful plastic surgeon. She had considered it romantic when he proposed to her after only two months of dating. But reality had hit her soon enough when she discovered the true face of her alleged prince charming. Sometimes she asked herself if she could have foreseen it, had she paid closer attention to certain signs. But she hadn’t. And if she had, she had misinterpreted them. It wasn’t her fault.
But thank god, that was all over now. After a draining divorce, which took longer than their actual marriage, she was free again. And she was looking forward to a time away from home, to finally bury the ghosts of her past.

The next morning her doorbell rang. It was probably Professor – what was her name again? Litza quickly checked her notes. She had a hard time remembering names, let alone weird Finnish names. Yes, Professor Kaija Nurmi, who would be her primary academic contact during her time in Finland. They had exchanged a couple of e-mails and Kaija had suggested to take her out for breakfast and show her around.
Excited, Litza opened the door and found herself staring into a pair of chocolate brown eyes. She had expected a woman in her fifties. Instead, there was a tall, well-built man in a lumberjack shirt in his… early thirties, maybe? Quite young for a professor. His chestnut hair fell in waves down to his ears and his facial features reminded her of that Portuguese soccer player, whose name she couldn’t remember. Anyway, apparently ‘Kaija’ was a guy's name, but then what did she know about the Finnish language.
“Good morning. Evangelitza York?”
“Yes, hi. You are Professor Kaija Nurmi?”
“No,” he laughed, revealing a set of strong white teeth, “she came down with a flu and asked me to substitute her. My name is Niilo. Niilo Vuorikoski, I’m working for the Linnansaari National Park.”
“Nice to meet you, please call me Litza.”
“Come on, I’ll show you around.”
Together they walked down the road towards the water. At approximately 1,700 square miles, Saimaa was the fourth largest lake in Europe. Divided by thousands of islands and narrow canals, the lake featured several basins, each with it’s own name. It was like a huge water maze and Litza was grateful for the guidance.
When they reached the lakeshore, Niilo took hold of a canoe and motioned for her to get in without a word.
Well, she had read about the notorious Finnish taciturnity. “Um, Professor Nurmi said, she’d take me out to have breakfast, so I haven’t eaten…” In fact she hadn’t eaten since around noon the day before and she was starving.
“I know. We’ll have breakfast soon.”
Litza decided to go with the flow, follow her enigmatic guide and enjoy the scenery. Now, in early May, the air was still crisp, but the sun was already high in the clear blue sky, warming her face. All around plants were awakening from a long winter’s hibernation, showing off their first shy leaves. Here and there she could still make out the last remnants of snow. She sat in the bow of the canoe and offered to help him paddle, but he declined.
“Next time. You’re probably suffering from jet lag.”
He was right. The ten hour time difference still plagued her. He pushed off and navigated the canoe skillfully towards an island. Litza took a deep breath of the morning air and smiled at the lake. What a lovely setting. A perfect mirror, the huge lake lay in front of her, the shorelines lined with trees. The shimmering water emanated a deep calm, and the only sounds that reached her were Niilo’s paddle strokes, a soft wind caressing the trees and the twittering of birds.
After a few minutes they reached a small sandbank, where Niilo jumped out of the canoe and tied it to a tree.
“Come on, this way.”
Hesitantly, she followed him into the forest. There was no sign of human life. She had expected to go to a cafe somewhere… “Is this island inhabited?”
“Not by humans,” he said without turning around.
What was he up to? A small knot of fear started pulsating in her stomach. She was alone with a stranger somewhere on a deserted island in Finland. Nobody knows I’m here. And what was he carrying in that backpack? A knife? A gun? Her gut feeling told her he was a good guy, but then her gut feeling had betrayed her before…
On the other hand Professor Nurmi surely wouldn’t send some psycho to meet her, right? The forest opened up to a huge rock, which Niilo climbed with ease. He obviously knew where he was going and following in his path made the climb easy.
But how did she know Professor Nurmi had indeed sent him? Maybe he had just made the whole thing up. If she ran back to the canoe now, she might be able to get away…
“Um, where are we going?”
He climbed another two steep steps and held out his hand, “We’re already there.”
With mixed feelings, she accepted his hand…