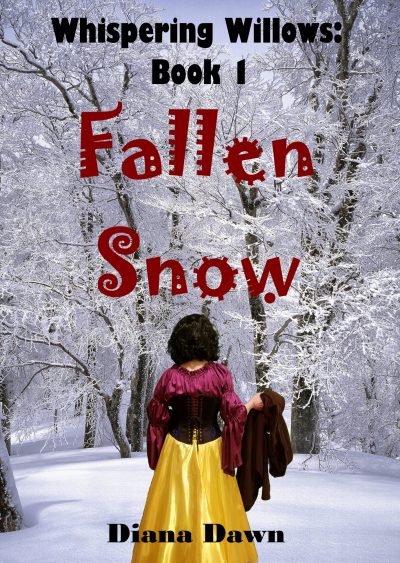 Snow found herself falling into another world…literally…as she ran from her evil stepmother who was trying to kill her. And now, a new world full of romance and mystery and magic awaited her. But, she is still hunted…still in constant fear for her life from that witch. Searching for her “prince and protector” among the handsome strangers in this mystical remote village, she finds new friends among its residents, both historical and present-day folks. A mysterious woods where once you fall into it, you can’t leave. This was her new home, a world of magic and new family and friends and…romance. A new twist on a fairy tale retelling and re-imagining adventure…‘Fallen Snow’ is the first book in the Whispering Willows series.

Diana Dawn is a writer and author of the new book series, Whispering Willows. As a lover of fairy tales and romance, Diana has focused her writing on romantic fiction, with a hint of classic fables. She has been a lifelong writer and first began creating stories in grade school. When she isn't glued to her computer or lost in her next fantasy story, Diana enjoys taking vacations with her husband and three children.
She would love to hear your thoughts or feedback at www.DianaDawnBooks.com. Or drop her a line at [email protected] for a special free promotional offer related to her Whispering Willows book series!

Years ago I was a part of a writing club online where we wrote stories. And since I love all things Snow White, I wrote about her and some new potential adventures for her. It turned into more of a "series" of chapters. Eventually, the club shut down. But I decided not to let all those chapters go to waste, so I decided to self-publish them into a book series.

Rein pulled his black cap over his head to cover his short hairstyle and only revealing his face. When he and Eddy both did this, it was hard to tell them apart. Rein planned it this way. Perhaps now was the perfect time to take advantage of it.
"Ouch!" cried Snow as she tripped over the rocks by the side of the cabin.
"Are you alright?" Rein crouched near her when he heard her fall.
"Yes, I just scraped my knee. That darn punch won't allow me to keep my balance very well, you know?" Her words were slurred from the rum punch.
"Well, it isn't bleeding, so I guess we don't have to get the first aid kit," Rein assured as he rubbed her knee tenderly.
"But I have to find Tweety. I can't leave him out here all alone. He's just a baby." Snow's voice was filled with concern.
"It'll be alright. We'll find him, or I'm not Prince Edward."
Snow was somewhat startled, as she thought he was Rein, "Edward? How can I be sure you are Edward?" she halfway teased.
"Well, the other day at the river, remember how you told me about your sixteenth birthday? About how the kingdom of the House of Loring threw a joust tournament in honor of your birthday?"
Snow smiled and then paused for a moment, thinking. "Why did you follow me out here, Edward?"
"I wanted to be sure you didn't go off into the woods. You know it isn't safe."
Snow sighed not quite knowing what to say next, "Oh." As Rein brushed her hair from her face and continued to rub her knee, she thought how well the potion was working and she will have to try it again sometime when they aren't faced with a cabin full of people. Perhaps the next time they go fishing. Yes, that would be a good time to try it. They would be all alone. Rein touched her lips with his fingers and then moved in to kiss her, once again. Snow stayed still and after a second of their lips meeting, she kissed him back. Considering the tingling effect the rum had on her that night and especially at that moment, she began to wonder if someone had used the Dixie Love Oil on her. She began to feel a warmth in her stomach, but it wasn't butterflies this time. It was … different.
Rein moved from rubbing her knee to rubbing her upper leg. Snow flinched and backed away from the kiss. Then she thought that perhaps she shouldn't use the stuff when it was just the two of them after all. Perhaps it was too strong.
Rein removed his hand from her leg, "I'm sorry, I guess I got a little carried away. Please forgive me."
This gentlemanly statement of his made such an impression on Snow that she leaned in to kiss him all on her own. Or perhaps it was the rum that had made the impression, but nevertheless Snow thought that she had finally gotten her prince. That Edward had finally fallen for her.
"Rein? Snow? Are ya over 'ere? Oh, good. I'm glad you found 'er, Rein. I was worried." Stevie had found the two over by the side of the cabin.
Snow frowned, "Stevie, this is Edward, not Rein."
"Well 'at's strange. I just spoke to Rein a moment ago when he went looking for…"
"We're fine, Stevie. Thank you," Rein interrupted trying to salvage his disguise. "You'd better get back to your watch, Stevie."
After Stevie had left, Snow stood up, "I trust Stevie, and you ARE Rein, aren't you? You tricked me!"
"Snow I can explain. I was only kidding. I was about to tell you, really."
Snow was furious, "Why would you say you were Edward? How would you know about my sixteenth birthday? You were spying on us the other day, weren't you? What else did you hear?"
Rein tried to hold her hands in his, but she pulled away. "Snow, I know that true love can't be found in any royal marriage decree no matter how sacred it is."
Snow's jaw dropped, "You must be eavesdropping on everyone in the village! Aren't you?"
"Snow, I wanted to show you what love really is. You aren't in your century anymore. You don't have to follow those silly rules."
"Silly rules! How dare you! That is my heritage and my family that you are calling silly! This conversation is over!"