You are here: Products Whenever You Want by Stephanie Van Orman 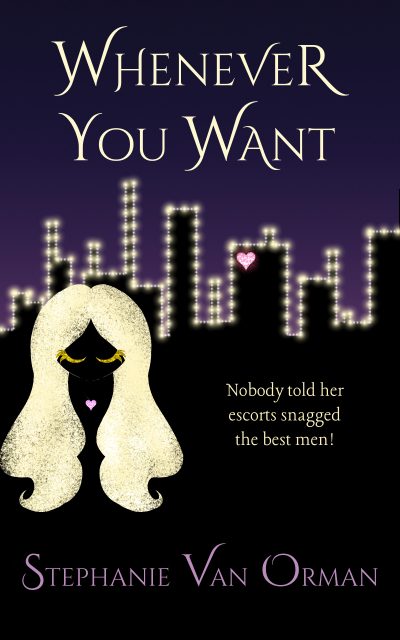 Whenever You Want by Stephanie Van Orman

Christina Witten didn’t want to be an escort! She wanted to be an administrative assistant, not a make-believe trophy on a man’s arm. If she could only make a bit of money, she could finish her course at the college and have the career of her dreams. Fate, however, threw her nothing but curveballs. The men she dated as an escort were supposed to be boring and she was certainly not tempted to fall in love with one of them. It had been a breeze until Mark Lewis entered the scene.

Stephanie Van Orman began writing novels when she was 13 and has always had a very strong passion for novels. She lives in the forests of Vancouver Island on a permanent writing retreat. Overlooking cedars and pines, she plans her novels, exploring the very best ways to carry her readers to new heights of suspense, magic, and romance.

When I was in my early twenties I decided I needed to cut off all my hair, because I had never had short hair. As it turns out, I don't look very good in a pixie cut, but I got the opportunity to experiment with wigs, with hilarious results. People at work didn't recognize me and men who never noticed me before looked at me in a completely different light. I could have led a double life, so I decided to write about if I had had one.

Christina popped her purple bubblegum and tried to work out some of the tension in her back. It was the dreaded night—New Year’s Eve. Rats! She was dressed like two billion dollars. Her dress was deep red, the color of the season, and she was wearing a long black coat with fur trimming Mindy had loaned her for the occasion. All her clothes were borrowed from Mindy, except for the inserts in her bra (those were a gift). To complete her look, Christina wore long dangling earrings with rhinestones inset in them and a choker to match. The wrap she would wear once the coat was hung up was black with deep red blossoms scattered across it in a gorgeous array. Christina thought it was prettier than the dress. The wig she wore that night was sandy blonde with bangs that fell slightly into her eyes.
That night she was supposed to meet Mr. Mark Lewis in the lobby of the Grand Morton Hotel—downtown—uptown—a really good part of town. There was a party there in one of the ballrooms and she was his insurance that he wouldn’t be going stag to the biggest party of the year.

She pushed through the revolving doors just before eight o’clock hoping she’d find him quickly. She was supposed to wait by the courtesy phone in the lobby. Phase one of the date wasn’t a big deal.
She’d been meeting men that way all along. Even though it had barely been a month, she felt like a seasoned professional. The reason sweat was forming in the space between her shoulder blades was that she couldn’t stop thinking about the cold fact that she was going to have to kiss her date. Of course, Mindy was right. Having someone to kiss at the stroke of midnight was the whole purpose of hiring an escort on New Year’s Eve. It was socially embarrassing to have no one to kiss. Christina just needed to pull herself together. She’d been kissed before. Lots of times… she thought.

She rolled her eyes and looked around for a place to spit her gum before her date got there. But she was so nervous she accidentally started to blow another bubble.

“Looking for something?” a deep male voice said coolly.

Christina’s gum bubble deflated as her eyes met those of one of the most handsome men she had ever seen. Christina didn’t even get a chance to examine him closely when she realized he was holding a silver dust bin in his hand, poised to catch her gum.

Christina reached into her pocket and quickly pulled out a tissue. There was no way that guy was her date, but her date was probably in the lobby (if he was on time) and she didn’t want him to see her spit a wad of purple bubble gum directly into a waste bin. She already felt like she’d tripped up by being majorly outclassed in the fancy hotel. She rolled her gum up in the Kleenex and dropped it into the bin.

“Thank you,” she said, trying to cool her cheeks and manage some sort of composure. Then she moved away and stood closer to the courtesy phone. She leaned against the pillar and tried to look for her date.

But the guy with the trash can wasn’t leaving. He set the bin down near a chair, came around, and leaned against the pillar beside her. “Was your gum grape or raisin flavored?”

“Those are the same,” Christina said, still scanning the room and not looking at the man next to her. “It just depends on whether or not the French side of the package is showing.”

He laughed. “Are you waiting for somebody?” he asked, flirting.

“Your date,” he answered, chuckling.

Christina looked around nervously. She had never seen the man. How was she supposed to answer? The stranger was clearly playing with her. If she said her date was gorgeous, she’d be in trouble when the short, bald guy rolled in. After scrambling for a moment, she answered, “I like the way he looks.”

“Hmm,” the brown-eyed stranger said, as he suddenly turned around the corner and put his arm by her shoulder, nearly pinning her against the pillar. “And you’re friendly with him no doubt?”

She nodded and said testily, “That’s why you shouldn’t be putting the moves on me.”