You are here: Products When You’re a Stranger by Akash Justin Ovian 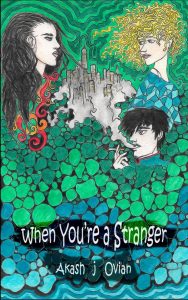 When You’re a Stranger by Akash Justin Ovian

Akash Justin Ovian was born in Bangalore, India and began writing fiction at the age of seven. He has spent several years studying the roles of egotistic thought and self-gratification in human relationships. He harbors unquenchable passions for Beat Poetry, Eastern Philosophy, and Indian spirituality. His work ranges from eccentric beat poetry to, what he terms, ugly romantic fiction. He is a sincere advocate for the liberty of the human spirit and reflects it, uncompromisingly, in each of his works.

I missed my train one winter morning when I was traveling from Indiana to Wisconsin. I noticed that there were five others who missed the train and were stranded in the station along with me. I suddenly noticed how alienated people are from each other. I came to see how disconnected we feel from strangers and how many times we miss such important opportunities to meet wonderful people in our lives. The entire novel came rushing into my mind as I managed to reach Wisconsin by the end of that day. I told myself that I will write something that can depict the adventures that people can find when they loosen themselves and open up to strangers.

I never bothered asking her why she was so attached to her parents. But when we went home to my new, little apartment that night, I could see the fear in her eyes when I pulled down the right strap of her bra. When I kissed her, I could feel the resistance that grew with every second of contact between her skin and mine. Was it possible that she could abandon everything that she believed in; that she had helped me believe in? It was Laneisha’s ease with her identity as a lesbian in which I had taken refuge for the last few months. Was it possible that the ease was changing into a struggle? I was sober, and afraid.