You are here: Products When We Swing by Kyla Ross 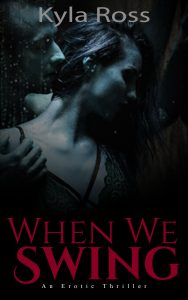 When We Swing by Kyla Ross

Friends have a way of breaking a person out of their comfort zone . . .

I always thought the concept of swinging was interesting. So I thought, why not put a dark twist on it? It was originally going to be a short story in an anthology. But once I started writing it, I thought “This could be one hell of a novel.” Eight months later, this book was born.