You are here: Products What’s My Wife Doing With That Guy? by Gustav Jorgenson 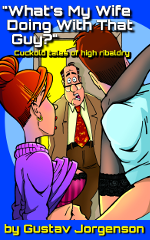 What’s My Wife Doing With That Guy? by Gustav Jorgenson

Middle-aged suburbanite Sam Jacobs thought this would be just another warm, lazy Saturday afternoon spent relaxing on his back patio in the shade with a good book and a glass of cold iced tea. But his peaceful plans were disrupted when Anne, his beautiful wife of twenty years, came bustling in, full of excitement to tell him she had been invited on a date with two younger guys. Surely she didn’t mean a real date? She was a married woman after all. But when Sam saw the revealing outfit she was wearing, he started to have doubts. And when Anne brought the two eager suitors home later in a gale of drunken laughter, Sam and his neighbors watched from the darkened patio to see just how far Anne would go to relieve the boredom of her and Sam’s stalled love life.

This and nine other another amusing stories are on offer in Gustav Jorgenson’s latest collection of cuckold tales. It’s all in good fun as various wives enjoy carnal relations with other men while their dumbfounded husbands look on and discover that they find the sight somewhat titillating, naughty as it is. These are tales of couples pushing the boundaries of acceptable behavior. Tired wives finding new excitement in fresh lovers and confused husbands torn between stomach churning jealousy and kinky arousal. Dive in and give these tales a try, you will laugh, you will cry, you will hopefully reach multiple climaxes.

However, as popular as polyamory is these days, I remain deeply skeptical. These stories are intended as fantasies, not a call to action. The deep bonds formed over many years of marriage are too valuable to risk by acting out these animal urges. Look how much nicer Paris became when folks resisted the animal urge to defecate in the streets. I fear that most relationships will be damaged by the jealousy and incrimination of actual infidelity in real life. I wish those of you actively living scenarios like this the best of luck. For the rest of us, I would quote the Big Lebowski: The brain is the biggest erogenous zone. Hold these fantasies in your head and may they rekindle the fire in your loins.

Be the first to review “What’s My Wife Doing With That Guy? by Gustav Jorgenson” Cancel reply