You are here: Products What to Kill For by Tomi Farrell 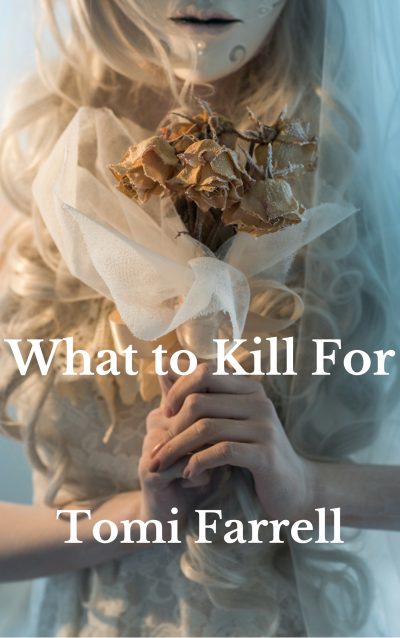 What to Kill For by Tomi Farrell

A single woman whose biological clock is ticking hunts for a husband in the “Land of Mr. Wrongs” also known as Los Angeles. “Fortunately,” she gets kidnapped by a Mexican mobster.

*****
Shannon is just another single woman in Los Angeles who is desperate to find “The One.” She is a pretty, decently-educated Episcopalian princess, and—it appears—there is absolutely nothing wrong with her. What appears to be wrong is that her Prince Charming is ten years overdue, and more than fashionably late in making his appearance.

Meanwhile, Shannon gets kidnapped by a Mexican mobster from one of the most notorious crime syndicates in Mexico. It is payback for her boss’s corruption and wrongdoing in secret, criminal transactions. Shannon’s hope for her release is slim since she knows her boss couldn’t care less about her life. She must escape on her own and return to her everyday agenda of searching for her future husband. She has to hurry, too, because she’s running out of time!

Tomi Farrell loves writing. Through considerable production work for films, TV, and other media in the crazy town called Hollywood, and also working as a travel journalist, she gained extensive insight into storytelling, which inspired her to write books and screenplays.

She has written more than a dozen feature screenplays and five books thus far, and continues to write to this day.

After witnessing so many single ladies in Los Angeles desperately searching for Mr. Right, I figured it was time for me to write a comedy about it. (with a happy ending 🙂

PART I
What to Kill For
CHAPTER 1

What do vampires kill for? Blood.
What do cannibals kill for? Human flesh.
What does Winnie the Pooh kill for? Honey.
What do single ladies over the age of thirty-five in Los Angeles kill for?

What about Los Angeles?

Okay, let us tell you a little bit about Los Angeles.

First of all, it’s the second largest city in the United States, with the first being New York. Having a population of four million people jammed into the five hundred-and-three square miles it covers, it is one of the most populous metropolitan areas in the world.
People move to big cities for various reasons, but primarily to pursue such things as a career, or seeking inspiration, and so forth. In Los Angeles, there is also the fabulous weather. The year-round warm climate encourages sunbathing on the sandy beaches, beach volleyball, and bike-riding on a path that overlooks the ocean even in January, while people in other parts of the country freeze and suffer from blizzards and other undesirable precipitation.
L.A. does sound pretty nice, doesn’t it?
And, of course, one of the main attractions for many people to move to Los Angeles is Hollywood. Yes, dreamers who want to become the next Hollywood star pour into this place like water from a faucet; or in some cases, pour out like sewage down the drainpipe after spending all their life savings, or whatever they managed to scrape together, for acting classes and expensive filmmaker courses, that are designed specifically to take advantage of those poor dreamers.
Let’s say you live in Georgia and you’re visiting Los Angeles. You’d think this town has got big money. The real estate is three times more expensive than in Georgia. All the fancy cars racing in the streets and people with pricey wardrobes and snooty attitudes dropping hundreds of dollars at stylish bars night after night, as if their credit cards were nothing but pieces of worthless plastic. Somewhat intimidating, but you’d feel awed at the same time when taking a glimpse of this luxurious town filled with beautiful people. You’d most likely exclaim, Wow, what a life!

Well, what if that were all an illusion?

The truth is, Los Angeles is filled with so many poor people, it’s no laughing matter. If you followed the people with those fancy cars, most of the time, you’d end up in front of a stinky apartment building, watching them wrangle into the tiniest tandem parking spot. And check out those stylish nightlifers’ credit card statements. You would doubt your eyesight, and may start to suspect that those people might be purposely spending as much money as possible to accumulate huge credit card debts in preparation of a well-planned bankruptcy. A lot of people also don’t own any real estate. People might wow you if you did.
So, yes, with the five-bedroom house that you own and your sweet savings for retirement, you Georgians are far richer than the shiny, empty-pocketed Angelenos.

So, now you may have your first clue about the urban metropolis called Los Angeles. But, hey, did you know this?

How many depressed ladies reside in this town?

Well, since there are no US Census Bureau data about depressed women, we couldn't give you an exact number, could we? But we can tell you this: a lot.

Shannon was, indeed, one of them.