You are here: Products What She’s Looking For by Trent Evans 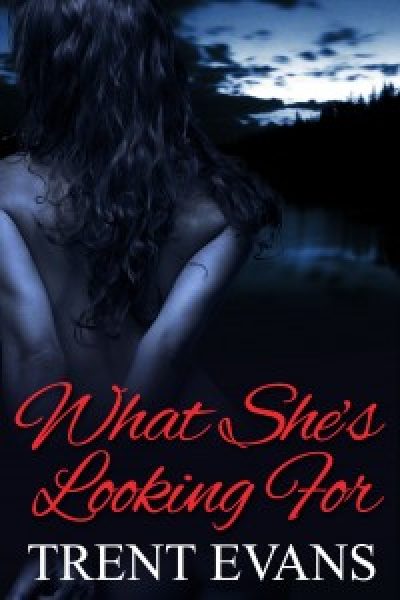 What She’s Looking For by Trent Evans

What if the very thing you crave is that which you most fear?

Ashley is a woman running from her past — and from herself. Ten years of marriage to a man who took his dominance too far has left her scared, but defiant … determined, yet desperate.

In a beautiful resort town in central Washington, she meets two gorgeous men; the stern, dangerous Parker, and the dark, brawny Drake. Can she risk herself again, surrender to the forbidden pleasure of being subject to these men? Or is the possibility of having her heart broken yet again too much to chance?

In the arms of not one, but two, strict Dominant men, can she find the peace she’s looked for all her life? The peace she’s only found in the bonds of utter submission, the dark pleasure of being the property of two men at once?

Or, as she learns more about these mysterious men, will she realize that it’s not only her heart at risk?

(Notes to admin: This title is free for Kindle Unlimited subscribers.

Also, this title will be part of a Kindle Countdown deal starting 10/09. The pricing schedule is as follows:

A long-time resident of the Pacific Northwest, the author believes that the high percentage of authors in the region (compared to the nation as a whole) is chiefly due to the fact that it’s so damned wet and miserable all the time there. They tend to use their long hours cooped up inside spinning yarns that depict things they’ll never see or experience — such as sunshine.

There was one serious drawback to being owned by two men. It was exhausting.
Morning sun poured over both of them, warming her skin, her body entwined with, surrounded by Parker’s big body. Still fast asleep, his chest rising and falling slowly, his arm draped possessively over her, a strong hand holding the weight of her breast.
Loathe to deprive herself of the heat of his body, the comfort of his embrace, Ashley knew what her instructions were. She knew the rules. Sunny Sunday morning or not, she had duties to perform, another Master to obey.
Saturdays were for Parker, but Sundays were for Drake.
Extricating herself from Parker’s heavy arm, she pressed her soft lips to his chest, marveling anew at the lean musculature, the barely leashed power in that male body. Moving awakened the pleasant ache of the stripes decorating the curves of her ass, her right hip particularly sore from the way Parker had allowed his strap to “wrap” the night before.
He liked the bruises that were the aftermath of her regular Saturday appointment with his strap — and truth be told, so did she. She took a moment to take in that tall, beautiful male body tangled from the waist down in the white bed sheets, then slipped off the bed, padding her way to the door and down the long, shadowed hallway that the morning light could not reach.
The shower mustn’t be long, for she knew Drake might awaken at any minute — and woe betide the slave girl who wasn’t present when he did.
Fresh, long, dark hair still wet, she put her cuffs on at ankle and wrist, the black leather a firm, comforting reminder of their control of her. Easing the door to Drake’s bedroom open, she found her usual spot; fortunately for her it was squarely within a rectangle of brilliant morning sunshine across the carpet.
Remembering her routine had been difficult at first, and punishments invariably followed when she’d failed, punishments she’d relished and dreaded in equal measure. But now it was as familiar as an old pair of shoes, her instructions, the road map for her life as a slave.
You will be clean for your Master.
You will be awake before your Master.
You will be ready for whatever he wants, whenever he wants.
You will obey.
Crouching on the carpet, she waited. Her breasts brushed against her thighs, the cool morning air, and the moisture evaporating on her skin rendering her long nipples into aching, hard bullets. She adjusted her position, making sure her ass faced him exactly, the twin moons of her buttocks and the slot of her wet, swollen sex the first thing he’d see when he got up.
His breathing was still regular, but she’d heard him stir. Not long now.
The silence made time slow, only the sound of her Master’s breathing and the pounding of her own heart dominating her consciousness. What would he demand? Would he spank her again, even though she was already bruised?
Perhaps he’d work on her breasts, currently unblemished. She imagined herself kneeling, looking up at him as she’d been trained, her tears streaming down her cheeks, wetting her cleavage as his huge hands slapped her breasts back and forth. The hot pain of the smacks, the ache of the marks. She’d cry out as he paused to pinch her nipples, to pull and twist them. His playthings.
If they let her come, it was always a painful, drawn out affair, her pleasure earned at the price of long endurance, abject obedience — and purely at their whim. Often she was deprived of it, and it fired her need to serve, to submit, and to please. Perhaps if she were that much more obedient, that much more pleasing, she’d be granted release, that screaming climax which haunted her dreams.
How often had she tried to sleep, bound, blindfolded, her hands unable to reach the dripping cunt seething between her clenching thighs. How she’d pleaded for that release, that deliverance, as they tormented her further, their hands, their cocks, their words, drawing her down further into that inescapable vortex of lust, pain, and surrender.
Drake, the dark Master of her Sundays, stirred behind her, and as the trembling of her body began, she smiled.
Soon, it would begin again.