You are here: Products What Happened in Between by LJ Scar 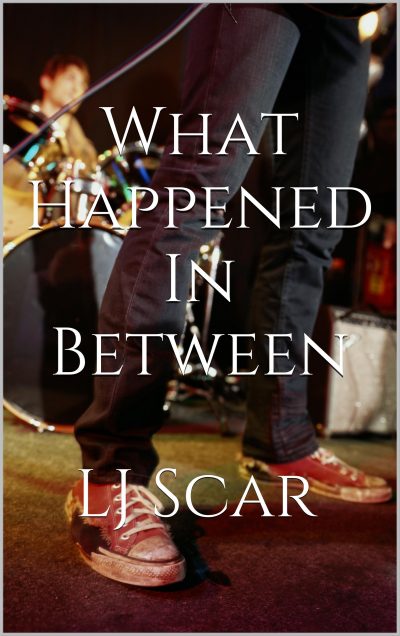 What Happened in Between by LJ Scar

She’s reserved, he gets around, she wants stability, he wants her.

Laken has come to terms with the hand she was dealt in life. Surrounded by a close knit group of friends and surrogate family she rarely lets anyone get close. Then she meets Seth, the charismatic and charming lead singer of Thin Veneer, a popular band at the local bar scene.

Together two unlikely friends learn the pitfalls of love, life and moving on. Amidst the backdrop of college, friendships will be formed, secrets will be revealed, mistakes will be made, lessons will be learned and hearts will be broken…

It isn’t what happened to her, it’s What Happened In Between.

REVIEWERS ARE SAYING:
5 stars “It’s not an easy journey, and the author has provided Laken with a wonderful array of friends, both male and female. All of these characters are very real to us; they are flawed, but sometimes capable of remarkable acts of kindness and love. All of them make bad choices at times, including Laken. In other words, Scar has written a true portrait of life, the life as experienced by young men and women of college age, who are struggling to come to terms with becoming adults.”

5 stars “Wow I was completely blown away by this storyline. First of all I enjoyed that it took place over several years and you were able to see the change in the characters. Though Laken is the main character, you really can’t get to to know her without the help of others such as Mandy, Devon, Marie, Alex, Megan and Rick. Each of these characters was developed so great that as a reader you really got to see them as your friends as well. Scar does an amazing job of describing situations so well, without giving you an exact point or straight forward place. And though the ending was a certain way, she is able to give you enough that each reader can have a slightly different ending of their own. I love that feeling when you finish a book and that the story of the character doesn’t end there; just like when you say bye to a friend smiling and imagining the possibilities they might encounter next.”

LJ Scar is my pseudonym and alter-ego. She lives hillside in a tiny cottage that has a view of the mountains and the ocean on a sprawling spread of land where all the people, dogs, and things she loves are within reach. She makes a living off the results of her imagination. She is a morning person who has great hair even after a rough night of sleep. She loves to exercise and doesn’t love junk food.

Nah…but someday. In the meantime, I live in a place called Kentuckiana. On the Indiana border outside Louisville, Kentucky with my husband, and a rescued border collie mix who makes me laugh constantly with his daily quest to get two balls in his mouth at once. I try to think up vivid locations based off places I’ve lived or vacationed and dream up romances and complications from observing strangers.

I don’t write for the money. There isn’t much to be made self-publishing and most of my books are $.99. I write because I LOVE TO READ! I write what I'd like to read, love stories that don't always have the ending you expect about people who seem real, get hurt and get back up! I also like to make covers that won’t make you squirm if your kids see it.
I hope you any of my books you’ve read as much as I did writing them. If you did, perhaps you will recommend it to your friends. I would very much appreciate if you would rate/review my book on the site you purchased. Ratings/reviews are how indie publications get discovered by other readers.

I try to think up vivid locations based off places I’ve lived or vacationed and dream up romances and complications from observing strangers. What Happened In Between was inspired by first kisses, near misses, the heartbreak and the healing power of love.