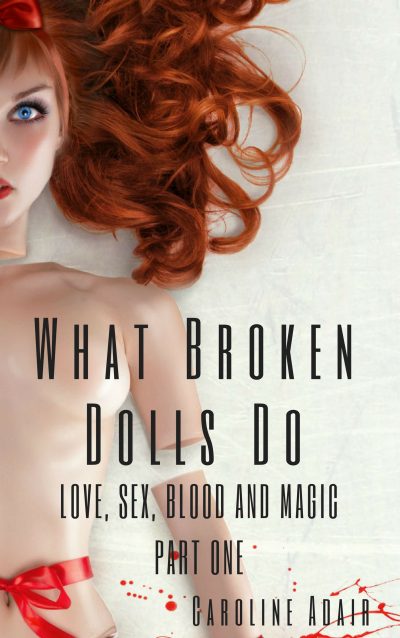 She is a seductive and sexy witch. She is also a murderer.

She maintains her facade until her life is turned upside down by a chance meeting. Her fortress begins to crumble, leaving her defenseless and in love with a man she knows will destroy her. Her supernatural powers give her wealth, the protection of the most powerful men on Earth, and put her on a collision course with two men who struggle to possess her in a sizzling MMF menage romance. Neither man will be able to forget her or let her go. Paige is forced to confront the truth of her dark past, what she truly is and make an impossible choice between the two men she loves. Their unbreakable passion and love will form a line that will someday rule the world … if they survive.

Caroline Adair is a native of Virginia and a long time resident of Tennessee. She attended MTSU where she majored in Social Work and minored in Art History. She has held a million different jobs, and traveled the world as much as she possibly could.

Caroline started writing stories at the age of eight, but life has a way of making one forget their dreams. Then one day it reminded her of what she was meant to do. She sat down to her keyboard and bled out all the thoughts that had been collecting inside her mind for years.

I have been writing since I was eight years old, but I never had the courage to publish anything. I went to the Women's March in Washington, D.C. and was inspired by all the strong women there. I thought of all the women that went through everyday with smiles on their faces, but inside they were really broken. I wrote the book for them.

"She made broken look beautiful and strong look invincible. She walked with the Universe on her shoulders and made it look like a pair of wings."
Ariana Dancu

I had been in bed for what I guessed was about two weeks. I rarely got up, except to go to the bathroom or get a drink of water. I ate the bowl of cereal my housekeeper left for me each day. My husband would bring me food but I left most of it untouched. He attributed my current state to my sinus infection and I let him believe that. He worked constantly now and barely noticed what I did.

I would wake, but I had lost track of time and day. I considered getting out of bed but the dull ache in my chest would feel too heavy for me to move. Something was wrong with me but I had little interest in trying to fix the problem. It would take more effort than I could muster.

I laid in bed for days, unable to find a reason to get out of it, until the fact that I was beginning to smell bothered me. I rose to shower; moving took all my strength.

I removed my smelly pajamas and was about to step into the shower when my heart began to race. My fingers tingled as though they had fallen asleep and I was trying to wake them. My breath became fast and shallow. My legs began to tremble. I clutched the shower door in order not to lose my balance. I briefly thought I should call an ambulance but I was only twenty-five years old. I had never experienced anything worse than a cold or my recent sinus infection.

I ran through the list of medical conditions that might cause rapid heartbeat. I hadn't smoked or even drank a cup of coffee in two weeks. I hadn't taken any medications.

My heart pounded as if it might escape from my chest and I felt as if I were suffocating. My limbs began to feel numb. Was I dying or having a stroke? I spoke aloud to myself to test my speech. I wasn't slurring or skipping any words.

I forced myself into the shower because if I was dying, I wasn't going to die smelling like a sewer. I also needed to shave and I wasn't going to die like that, either. I washed my hair despite my hands being numb. I picked up my razor but my hands quaked. It tumbled from my fingers, falling next to the drain.

I thought of Sarah, lying on a gurney with her face covered in vomit and her amber eyes half closed. Her mouth hung open and white foam dribbled from the corners of her lips.

The trembling of my legs forced me to sit down. I knew that something was terribly wrong, but I dismissed the idea that I was dying. If I were truly dying then I would have done so already. Death was usually either slow and agonizing or struck with one painful blow. It was rarely a tease. I let the water run over me until my heart started to beat regularly and my breathing slowed.

I stood carefully, making sure my legs would hold my weight. I retrieved my razor to shave all my private bits. I stepped out of the shower after I was clean and trimmed to look at myself in the mirror.

I wiped the condensation from the glass and stared at my reflection. Nothing about my appearance seemed out of the ordinary. My blue eyes were a bit puffy and I was paler than usual, but nothing indicated a serious medical problem. I went back to bed without bothering to put on clothes.

I was a damaged person but I understood my damage. It was no worse than anyone else's. There had been times in my life when I wondered how I continued to keep living or caring if I did. Everyone feels like that, at some point or another. That wasn't the problem. I had made it through those times as I had everything else.
There were holes in me but I was used to them. I snickered at the thought of my psyche looking like Swiss cheese at this point. My laundry list of "Shitty Things That Can Really Fuck a Person Up" was long but didn't explain my current state. I wondered what level of fucked up I was at currently. After the whole shower incident, I believed I had gone up a notch.

I curled my knees to my chest and tried to think my way through the problem. Something important eluded me, and the answer hovered at the edges of my memory. It hung there just out of my reach.

I rolled over to stare at my ceiling and turned its pristine whiteness into a movie screen. I let my life play out before me as if it weren't even mine but someone else's. It was always better to think of my life that way. If my memories belonged to someone else, I didn't have to accept them as my own. Sometimes, it made the ugly parts more gruesome and the beauty even more startling.

I was white trash but I did everything to rise above it. I read every book on proper manners. I married the perfect man and we both had perfect jobs. I was well groomed and in perfect shape. I always appeared to the outside world as the perfect wife.

I was the perfect host; getting an invitation to one of my parties was like winning the lottery to some people. I hated those parties and almost every person that attended. I tolerated them because I had mastered the ability to smile while blood ran down my hands.

My husband was a handsome and brilliant man. His family despised me. They accepted our marriage because they would face ruin if they did not. I could hardly blame them for their bitterness. I wasn't good enough for their son. I knew it, and they knew it.

My husband loved me anyway but most days I could not understand why. He reminded me of the first day of spring after a long winter. I often found it difficult to look away from his arresting beauty. He took my breath away, then gave me his. I didn't deserve him.

My resume was a work of fiction but I managed one of the biggest art galleries in Atlanta. My boss in New York stared at me with ravenous hunger each time I saw him. He made my skin crawl, although I am sure other women would have been flattered.

He did his best to manipulate situations to his advantage. He would tell me he needed me in New York and that his secretary had made all the arrangements for me. I always thanked him and told him there was no need. I could have a plane ready in an hour and we owned a suite of rooms at the Carlyle. He would laugh as though he had forgotten but we both understood he hadn't. He arranged the hotel room so he could fuck me. It was an unspoken invitation for me to say, “Yes.”

He would say outrageous things to me, ask me to come with him to his summer home, and tell me all the things he wanted to do to me. He cornered me at an opening and said in a low voice, "Paige, you're miserable. I can make you a very happy woman." I laughed and exaggerated my southern accent as I protested, "Behave yourself, now! Don't make me have to spank you!" He didn't laugh and told me how much he wanted to spank me instead.

Apparently, it doesn't matter where a woman works. Sleazy bosses abide in every fucking corner of the Earth. There is no escape. I kept my job because my boss wanted to sleep with me. He must have figured out over time my resume was a fabrication. I didn't complain about him. I wasn't stupid; he would portray me to others as if I were a whore or worse, too inept to do my job. The thought of admitting to others that I was only hired because I was a pretty piece of ass was humiliating.

My only solution was to quit and I didn't do that because of my husband's parents. To them, I would be a lazy, good for nothing wife if I didn't work. The one thing I didn't need to give them was more mud to sling on me.

My life was a forgery, a perfect replica of a masterpiece. It was the perfect lie.