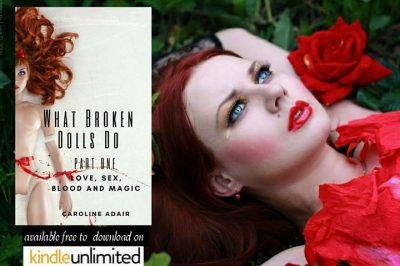 She is a seductive and sexy witch. She is also a murderer.

She maintains her facade until her life is turned upside down by a chance meeting. Her fortress begins to crumble, leaving her defenseless and in love with a man she knows will destroy her. Her supernatural powers give her wealth, the protection of the most powerful men on Earth, and put her on a collision course with two men who struggle to possess her in a sizzling MMF menage romance. Neither man will be able to forget her or let her go. Paige is forced to confront the truth of her dark past, what she truly is and make an impossible choice between the two men she loves. Their unbreakable passion and love will form a line that will someday rule the world … if they survive.

Caroline Adair is a native of Virginia and a long time resident of Tennessee. She attended MTSU where she majored in Social Work and minored in Art History. She has held a million different jobs, and traveled the world as much as she possibly could.

Caroline started writing stories at the age of eight, but life has a way of making one forget their dreams. Then one day it reminded her of what she was meant to do. She sat down to her keyboard and bled out all the thoughts that had been collecting inside her mind for years.

I attended the Women's March in Washington, D.C. I was reminded of all the strong women in my life . I was reminded of the women who had survived unspeakable abuse and succeeded in spite of it. I wrote it for all the broken dolls that no one wanted for Christmas. They are my sisters.

Evan stopped in exhaustion. He found himself in front of an old mansion that had been converted into a strip club. He climbed the stairs and walked in before he even realized he'd done it. He had no idea why.
The club was dark inside. Music played from a sound system that echoed throughout every room. A bar was down a corridor and he headed toward it to get a glass of water. He paused when he saw a flash of fire and smoke from the corner of his eye.

It startled him and he turned to look. A pair of aqua blue eyes peered at him from over a book. The fire he thought he had seen was her hair that fell in heavy waves of red gold all around her. The smoke was her cigarette, burning absently in the ashtray in front of her. Her gaze was scathing and her eyes were filled with disgust, as though he were a dead skunk on the side of the road, stinking and putrid with rot. She hid behind the cover of her book.

She was a stripper reading a book. He had only been in a strip club once, at his bachelor party years ago. He wasn't accustomed to them but couldn't recall a single stripper ever reading a book. It seemed odd and out of place. He wondered what kind of book she was reading. Evan moved close enough to her to read it's title. The Weight of Water.

Even though she was trying to hide, Evan could still see her. She was beautiful, so beautiful he rubbed his eyes to make sure that she was real.

She hated him for some reason. It was like a bucket of cold water being thrown on him. She scooted down into her seat to hide from his eyes but she couldn't. He had seen her and his heart left his chest. She had stolen it without saying a word.

Evan didn't believe in love at first sight until that moment and when it hit him, it stole the air from his lungs. He thought for a moment he must have been having a heat stroke from all the running. There must be some logical reason behind what was happening to him. He was drowning and fighting to breathe. All he could hear was the sound of waves crashing in his ears as he drowned in the ocean of blue in her eyes.
He could feel everything in her. She was quiet, sad; she was alive with love and yet she was alone. Her solitude wrapped around her like a protective shield. She was in his pulse and in the beating of his own heart. His chest constricted for no discernible reason, but then he realized it was coming from her. He felt her apprehension, disgust, and dread inside himself.

He turned his attention to the barkeep said, "I'd like to meet the girl with the red hair." The barkeep shook his head at him. "That one you'll never speak to unless you pay her. She isn't one for idle conversation." Evan pulled out his wallet. "How much for an hour?" The bartender informed him without surprise, "It's four hundred dollars an hour." Evan fished out his credit card and said, "I'll take two."

The barkeep signaled to the girl with his head; she rolled her eyes as she put her book down. She walked over to him, her full body coming into his view and he was a lost man.

She was petite, but not skinny. Instead, she was strong but at the same time delicate. Her full breasts peeked out of the top of her black gown. The dress clung sensually to her body and her red hair fell to her waist in soft, heavy curls. It made her look like a rose but he knew she covered herself in thorns for protection.
He followed her like a sleepwalker to a room with soft golden light and a plush sofa. She told him to take a seat and he did so without even realizing it.

A shelf of books occupied a place in the front of the room. At least one hundred books lined it. Hemingway, Jane Austen, Emily Bronte, Stephen King, John Steinbeck, and a plethora of other authors were all crowded into the space. Her copy of The Great Gatsby was old, the spine almost white from wear, but his own copy was just as worn. All these books were hers. She was a romantic and a dreamer.

Soft music began to play and he heard Sting singing "Fields of Gold." She stepped over to him and knelt between his legs. Her hair drifted over him in a soft, red wave. The simple touch of her hair on his body made him want to pull her to him. Something told him that touching this woman would be a mistake. The closer her body came to him, the further away the real woman became.

He watched her sway almost imperceptibly as her dress came off one button at a time. Slowly, her black thigh-highs, tiny panties, and lacy black bra were revealed. The tips of her nipples strained through the fabric of her bra and he fought the urge to tear the garment from her. He wanted those lovely nipples in his mouth.
Her hair swept back from her shoulders and fell down the length of her slender back, falling forward like a curtain as she leaned into him. Her breath hot on his neck, he could almost feel her full, pink lips kiss it. He wanted to turn his head to take her mouth but he fought that instinct with every difficult breath he took.

He could feel the real woman she was leaving as she let her mind take her somewhere far from him. She leaned back and unclasped the bra he had been aching to rip from her. The girl that had regarded him with disgust was gone to a place where he couldn't reach her. His heart broke in his chest as she slipped away.

She didn't look at him, this beautiful woman. She was looking beyond him into some other world where he wasn't. The pink tips of her breasts hovered in front of his mouth. He wanted to cry they were so close to him but he knew if he touched her, she would be gone from him forever. He had to stop her from leaving him. He put his hand on her arm and tried his best to bring her back. He had to bring her back because he loved her.