You are here: Products Werewolf Nights by Mari Hamill 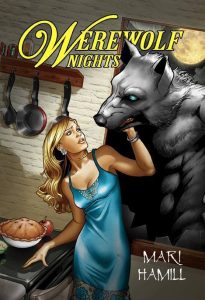 Threatened by financial ruin, widowed bakery owner Catherine Mercy leads a solitary life with more interest in reading about werewolf lore than in finding a man. Her one true love disappeared after high school and her now deceased husband kept her trapped in the house claiming that a werewolf might hunt her down one day, just as her grandmother repeatedly warned her. When Hollywood interrupts the town’s monotony by shooting a werewolf movie on location, Catherine’s best friend Anne pushes her to audition. Already in her thirties, Catherine feels ridiculous trying to become an actress, but lands the leading role.

Catherine’s daily routine turns into a hair-raising adventure as fame begins to surveil her wanderings and she falls for her sexy costar Greg Byron despite this actor’s neon warning sign that flashes conceited womanizer. He’s also smitten by her, but just when they are about to find happiness, a wolf bites him.

Born and raised in San Juan, Puerto Rico, Dr. Mari Hamill graduated from Harvard with an A. B. in English and the University of Michigan with a Ph.D. in comparative literature. This world traveler – she’s lived in Guaynabo, Puerto Rico; Boston; Montreal; Paris; Venice; and Lausanne, Switzerland – speaks French, Spanish, German and some Italian. A scholar, a writer, a public speaker, and a social media influencer—she’s been featured several times on Evan Carmichael’s list of the top one hundred twitter users in Los Angeles— she begins her career as a novelist with Werewolf Nights. Since the novel’s publication, she has talked to college students about writing, has had numerous appearances on the radio and at author events, and has even been the guest of honor at an improv show.

The characters lingering in my head that wanted the spotlight inspired me. I enjoy surprising readers in the same way that life throws me unexpected twists and turns. The unpredictability of werewolves pulled me into picking them, since once the full moon rises no one knows what will happen next. And last but not least, I wanted to tell a love story with supernatural obstacles. The bigger and badder I made the enemy that stands between the two main characters’ love, the more precious and exciting the victory would be. I truly hope readers will enjoy the full moon ride.

1. The Wolf Lady
Catherine Mercy sat on the emerald-green grass of Wereville’s Yellowtoothed Park, confident that the date that would arrive in a matter of minutes would in no way alter the course of her life. The park contained the assumed estimated location where the town’s legendary werewolf-Viking founders planted their flag upon arriving centuries ago. Those were the times for interesting destiny dislodging occurrences such as werewolf settlements if, that is, they ever took place in Wereville.
Many debates between historians and cartographers took place before Wereville established the official landmark. The issue almost made it to federal court until, in 1983, Wereville’s mayor, Lars Speck, to prevent national embarrassment—although Willow Creek in California got away with its kooky Bigfoot stories—picked the spot by throwing a sibylline javelin and declaring the northern god Tyr had guided his hand.
Harboring thoughts of gods and werewolves, Catherine looked at Wereville’s flag undulating on its pole, hung there on special occasions, and felt a twinge of sourness in her belly. Yellowtoothed Park attracted unsettling events. If her date were to go well, she might find herself walking into the unknown once again, and for seven years now, she had learned to cherish her routine. So although she had a rendezvous, she anticipated with excitement that she’d make it a short one.
Jared, Catherine’s date, walked toward her, waving hello with both hands. His attractive face blocked the werewolf emblem of the banner from Catherine’s view. With his deep brown eyes, he stared at Catherine with delight. Her hair in a ponytail and the absence of makeup didn’t detract from the lovely, innocent-looking facial features that summoned adventure and sometimes even trouble. The soothing murmur of the nearby creek’s flow muted Catherine’s stabbing thoughts about her tragic past.
“Thanks for coming on a date with me. Ever since high school, I’ve been curious about you,” Jared said, opening a checkered yellow-and-purple picnic blanket for them to sit on.
“I had no idea. That was a long time ago,” Catherine responded, reluctantly moving to the blanket. She preferred staying on the grass, but he insisted, saying their pants would get wet and sticky. Her contrived response, aimed at redirecting the banter away from the past, failed.
“You had Jimmy and Frank, but now that they both, well …” Jared stopped, making sure the blanket was flat on the ground before he sat down. Catherine curled up, putting one hand around her bended knees and the other on the blanket for support. Jared hit the target: the only unsealed wound in her past and a reason—or better said, the main reason— she despised dating. The topic of her former flames popped up as if it had recently been in the local news.
“Disappeared … passed away,” Catherine said.
“Right,” Jared responded, playing with his chestnut hair.
Everyone in town knew about Jimmy’s disappearance the summer after their senior year in high school. He’d been Catherine’s sweetheart. Everybody bet that Catherine and Jimmy would marry. Years later, Frank, her husband, died in a boating accident. Police speculated the Great Lakes swallowed his body. Upon revisiting her love life, Catherine’s shoulders curled up an inch. The knots around her neck tightened. She could feel warm tears seeping behind her eyelids, and although nothing came out, her eyelashes felt sticky. Jared’s move had been a low blow, perhaps aimed at placing her in a vulnerable emotional zone. Using a meditation technique her best friend, Anne, taught her, Catherine quickly set her eyes on Jared and focused on the breeze on her cheeks, the fish in the stream, and the ten different hues of green she could count. But only thoughts of her bakery’s rising bread and the warm scent of hot chocolate placed her back on kilter.
She remembered Jared as the too-cool-for-school type with a rock band, usually wearing black clothes, thick eyeliner, and long hair. In contrast, today he looked preppy: khaki pants and a blue shirt. His hair was cut short. He looked good enough to make a woman proud. Anne claimed that, during middle school, Jared picked the seat next to Catherine’s in English class. Catherine denied this. But every day in the middle school cafeteria, a dessert would make its way to the front of Catherine’s plate, where it sat untouched. Catherine dreaded that her classmates would assume she took gifts from punks.
Jared was Catherine’s prime suspect. Napkins served as gift cards, but Catherine, pretending she had allergies, would blow her nose casually with it without daring to read the fine print in front of everyone. To Catherine’s relief, Claus, a very quiet chubby guy who kept to himself, would eat the sweet treat.
Catherine’s and Jared’s hands sat an inch from one another’s. His hand drew closer to Catherine’s pinkie every few minutes, but finally she placed her hand in the pocket of the khaki cargo pants she wore paired with a white T-shirt.
“I don’t really date, but I’m giving this a try. My friend Anne insisted. She says I need to get out there.”
“I’ll thank her then. I know why you don’t date, but with me, you don’t have to worry. I’m prepared to handle a woman like you. I’m not afraid. Here …”