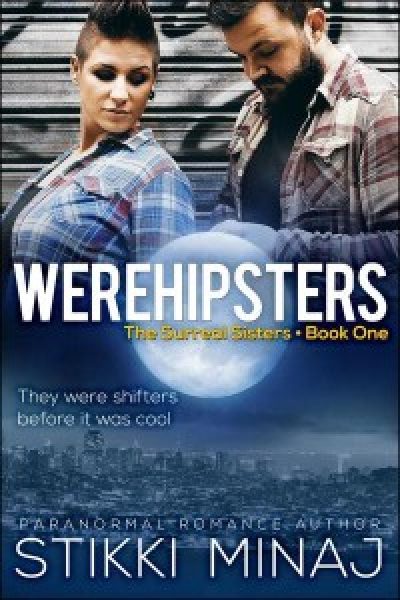 Leo and Zane were shifter billionaires looking for their mate.

When Leo and Zane saw me, they knew that I was their soul mate. But could I stand their dark secret, an unspeakable curse they forever bear inside?

WEREHIPSTERS. Get it before it’s hot.

Stikki Minaj is a 20-something with a sense of humor and a flair for writing steamy scenes. Her series, The Surreal Sisters, follows the exploits of a family entangled in the paranormal.

Zane was standing behind me now, and I could feel his huge erection press into me. “We fell in love with you the second that we saw you walk through the doors at work today. Forgive us for the time we had to take to make things ready for you.” He thrust his hips into me, and I couldn’t resist pushing back. We were fully clothed, but it felt so good. “We would like you to take us as mates.”
I stopped kissing Leo. “Both of you?” They were both really sexy, sure, but I’d never had two guys before. “Are you sure?”
Leo took my hand, still with a little cream from the profiterole, and put it on his straining dick. “Does it feel like we’re not?”
Suddenly, my feet were no longer on the floor. Leo scooped me up, and he placed me on a massive California king bed covered in silver sheets and a dark gray comforter. I was on my back, and he was eating me with his eyes. There was a mirror on the ceiling, reflecting everything back. He took off his tie, and he was too impatient to unbutton his shirt. He ripped it off, and buttons sprang everywhere. His belt was loosened quickly, and he shoved his boxers and pants down. He had muscles where I didn’t even know you could have muscles. He was perfect all over, in a way that would put a Greek statue to shame. His hands went to untie my wrap dress, and he got all of my clothing off quickly. He ripped my bra, too impatient to unhook it in the back. I was as naked as the day I was born, and the two of them were looking at me like the best dessert in the world. Leo put his face between my thighs, and he began to lick me with long, steady laps. My body was on fire.

Be the first to review “Werehipsters by Stikki Minaj” Cancel reply