You are here: Products Weekend with Friends by S.D. Lange 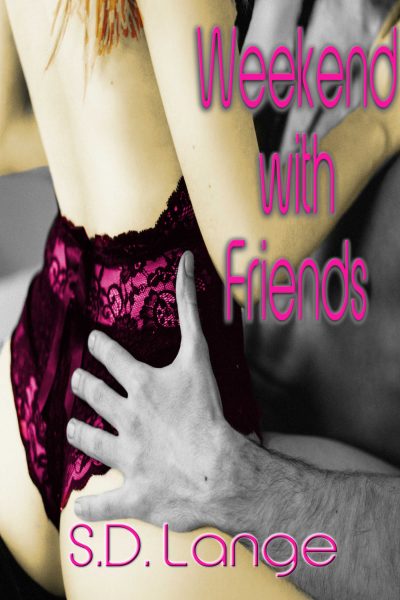 Weekend with Friends by S.D. Lange

When best friends, Luke and Keith, plan a surprise weekend getaway for their wives, no one could imagine the events that were yet to come. Sexy innuendo and flirtations lead to much more. One couple is introduced to the world of swinging, after all, it’s between friends. When four becomes six, the possibilities are endless.

S.D. Lange is a native Californian with a penchant for the naughty, fun, and exciting. When not creating hot new stories, she can be found in any number of indie bookstores, in the garden, or lounging in the West Coast sunshine. Her perpetual search for the perfect cup of coffee, the perfect jeans, and the perfect story continues.

Without looking at either Aida or Keith, I teased her nipple until her breathing grew ragged. I thought I had gone too far, so I released her. Jenny seemed slightly disappointed in my decision, as did Keith and Aida. Jenny slid back into the seat and began to eat again. There was no effort made to retrieve the lacy undergarment from the floor, and she remained gloriously topless. I watched as Jenny closed her eyes and savored the heat of the roaring fire.
“The heat feels good on my skin,” Jenny said aloud. Her eyes flashed open as she looked at Aida, in a way that screamed, I dare you. My wife didn’t hesitate. Aida tossed aside the tank top she wore while remaining in her chair. Keith and I cheered loudly. When Aida stood up, a wicked grin formed on her lips, and she stared at Jenny. Anticipating her next move, Jenny stood as well. Aida hooked her thumbs beneath the thin straps of the thong. Jenny mimicked her actions with the sheer panties she wore. Almost like a showdown, both women settled in place for a quick strip as Keith and I watched with eagerness. The table sat near the fireplace, the glow cast highlights on both of their female forms.
Aida is tall and thin, smaller busted and hipped than most women, but still has beautiful curves for her body. You could describe her as having legs that reach her neck. My wife is gorgeous, long, thick auburn hair and smoky, hazel eyes. A dazzling smile and youthful personality combine to belie her real age—most people mistake her for twenty-five instead of thirty-five. Jenny is younger by several years, and fuller figured. Her C-cups swayed seductively while her hands hovered anxiously waiting to strip the panties from her rounded hips. Jenny has alabaster skin, medium length, curly black hair. Long lashes that could change her appearance from innocent to wicked accentuated the perfect heart-shaped face. Aida had often compared her to a Greek goddess.
With no further warning, Aida jerked the thong down to her thigh and quickly stepped out of it. Jenny attempted to do the same but lost her balance and fell back, her bottom bare, onto her chair. Aida twirled her thong in victory before letting it go in the direction of Keith’s head. He caught them as the silk hit his cheek. Keith surprised no one by bunching them up in his hand as he inhaled the heady scent of Aida’s pussy. Keith leaned toward me, whispering yet still loud enough for all to hear, “They’re still wet.”

Be the first to review “Weekend with Friends by S.D. Lange” Cancel reply