You are here: Products Weddings Coordinated: A Romantic Comedy by Lisa S. Gayle 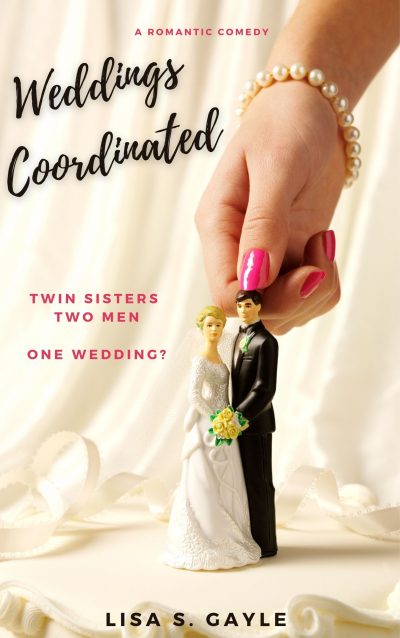 Danielle and Mallory are as different as can be! And they’re about to get themselves tangled into an unexpected, sticky web of drama.

What the twins anticipated being a simple, brilliant plan quickly becomes a complicated mess with both sisters hiding secrets and fighting strong feelings for some incredibly tempting, off-limits men.

Mallory needs Danielle to impersonate her at work so she can sneak off to her best friend’s wedding. But how can you pretend to be your twin sister when you’re nothing alike?

Danielle finds herself trying to save Mallory’s career while her sister’s demanding, perceptive boss, Ethan, watches her every move. It doesn’t help that she is inexplicably attracted to him when she vowed to hate his guts.

Mallory begins to have conflicting feelings for her engaged best friend, Jesse, a sweet, rough-and-tough auto-mechanic that’s been her rock since childhood.

Will the twins get caught in their silly plot to hide the truth? Or will they get more than they bargained for?

This is a standalone, full-length romantic comedy. It features two emotionally-charged romances roped together in one hilarious, fast-moving plot!

Lisa S. Gayle lives in the beautiful, mountainous Pacific Northwest. She enjoys traveling and all things outdoors, including hiking, camping, and s’mores. She’s a soccer mom who loves to take her family on adventures while attempting to keep up with her energetic husband and children.

She specializes in contemporary romance and believes in falling in love with a happily ever after.

“Nice,” she said while craning her neck up to look at him. “Some gentleman. I didn’t invite you in here.”
His eyes widened, and he opened his mouth to say something, but then seemed to change his mind. She could tell he wasn’t happy. Good, she thought. She could deal with hating someone who was a cold, miserable SOB—it was the warm, tender ones that got to her.
He glared at her like she had done something unheard of, with his eyes narrowed into thin, angry slits and his jaw set in a hard line. She had no idea a man could even get that upset without having to go to four different flower shops in one day. What was his problem anyway? He was the one who broke through her door.
She swallowed and squared her shoulders to prepare for battle. He stood in front of her like a powerful statue, holding a strong, authoritative presence the businessmen in Beverly Hills lacked. Her heart pounded, and butterflies gathered in her stomach, alerting her to the sad realization that she was actually turned on by him holding his ground.
“You’re not answering your phone or your texts,” he informed her firmly, going from furious to collected faster than anyone she’d ever seen. “I thought something had happened to you.”
Danielle tensed and sucked her bottom lip into her mouth, gnawing on the tender flesh. They hadn’t thought things through very well. Obviously, Mallory wasn’t going to be able to answer her phone for anyone while she was on that plane, including her boss. She looked away and began fidgeting with the hem of her shirt. Way to control your body language, she thought and dropped her hands to her side.
Trying to gain the upper hand, Danielle flashed him a powerful glare that she hoped would pierce him to the core. Unfortunately, she was pretty sure she didn’t hold her fierce look because she really saw him this time and he was amazing.
She wasn’t the type to drool over a guy, but he had her in a trance. His eyes sucked her in like a tornado, their color a mesmerizing gray that complemented his coarse, black hair. She guessed that he was probably in his mid-thirties. He was in shape, tall and lean, but not too bulky—her type on the outside. Why was it always like that? They looked good until they opened their mouth.
Mallory had left the little tidbit about his godly good looks out—the little traitor—but she had to admit that her sister had probably made the right choice since the temptation to wander about the resort to steal a peek would have gotten her into trouble. Although it hardly mattered now, she’d seen him.
Danielle stared like an idiot. After a short moment, she shook her head and forced herself to snap out of his trance. Only then did she discover that along with his attractiveness, he actually looked tired, like the zest for life had been sucked right out of him. Awe, poor thing…insert sarcasm and eye roll here. Too many long hours, she’d guess.
She titled her head and glared at him. The game was on. She’d never lost a staring contest with anyone other than Spencer, and she wasn’t about to back down to a man who’d caused her sister hell.