You are here: Products We Need Him Part 2 by Sage L Mattison 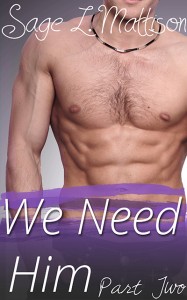 We Need Him Part 2 by Sage L Mattison

After spending a mind blowing night with Brett the Brit, Jake and Jamie are determined to get him back after he left in a hurry the following morning.

Sage lives with her husband and son in the suburbs of Chicago but dreams of a life on the road. She enjoys spending her days writing and playing with her toddler.