You are here: Products Waxing Poetic for Christmas by Mara Townsend 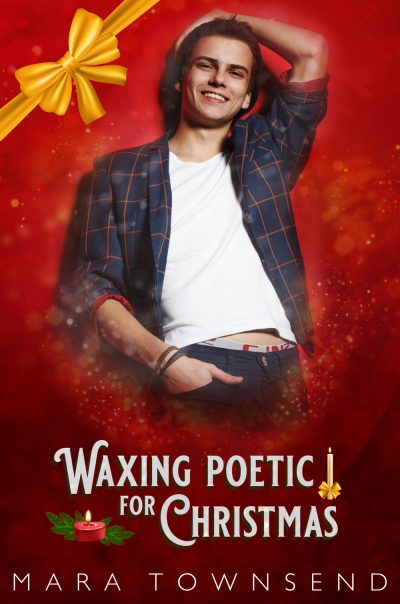 Holiday-obsessed Nick wants to know what Casey wants for Christmas, but there’s one thing Casey’s been holding back on. All he wants for Christmas is to experience the hot drip of candle wax on his body…if he can find the courage to ask for it. All the sugar cookie-scented candles make it hard to resist adding a kinky request to his wish list of gifts from his sexy St. Nick. Will Nick become Casey’s personal naughty Santa and fulfill his secret fantasy?

Mara Townsend is a bisexual indie author of LGBTQ+ romances. She loves to explore intimate relationship development of the feels-inducing variety to invoke the eternal just kiss plea from the reader, as well as crafting strong platonic friendships with heaps of heart and soul. Her stories showcase diverse representation, love stories with realistic emotions—never mindless fluff, a healthy dose of humor, and a side helping of her favorite tropes.

She hangs out in fan communities online and learned how to write the kind of stories that she’s passionate about through experimental character-driven fiction based in her favorite worlds. When not writing, she can be found soaking up sunshine at the beach, traveling the world to fill in her passport, perpetually collecting plants, and reading as many fake-dating romance books as she can find.

As Casey strips, Nick grabs his fluffy Santa hat and sets it on his head so it sits askew. It pushes some of his wavy fringe into his eyes and he watches Casey as he waits for Nick’s command.

Nick waves to the shower curtain. “Kneel down in the middle. Hand on your thighs.”

Casey’s quick to follow directions, dropping to his knees. The plastic curtain crinkles and it sounds as loud in Casey’s ears as his breathing. A shiver ripples through his body. His nipples harden. It’s cold in the room, even with the building’s heat on.

While he waits, Nick lines up a few candles and a lighter.

“First things first,” Nick murmurs. “I want you to watch me.”

Nick doesn’t even have to ask for that. Casey’s gaze is already glued to him as he lights one candle and lets the wax pool once it begins to melt.

He holds the candle so it hovers over his exposed wrist. His gaze flickers to Casey.

“Are you watching, Case?”

Nick waits a beat, moving the candle just enough so the flame dances. Then he allows a drop of melted wax to fall onto his wrist. Nick inhales through his nose and hums. The wax skips down, hardening into a pearly line across Nick’s tan skin.

“Nice,” Nick murmurs. “Want me to do another test drop?”

In his head, Casey says yes.

What happens aloud is a sound that’s some approximation of an affirmative that half-lodges in Casey’s throat. He sucks his lips between his teeth, eyes trained on Nick’s wrist. They’ve barely started and already his chest is expanding, pulse thrumming beneath his skin in anticipation. Casey swallows thickly and resists the urge to shift on his knees, keeping still under Nick’s gaze.