You are here: Products WAR: Horseman of the Apocalypse – Love Blooms Eternal by Jeff Fuell 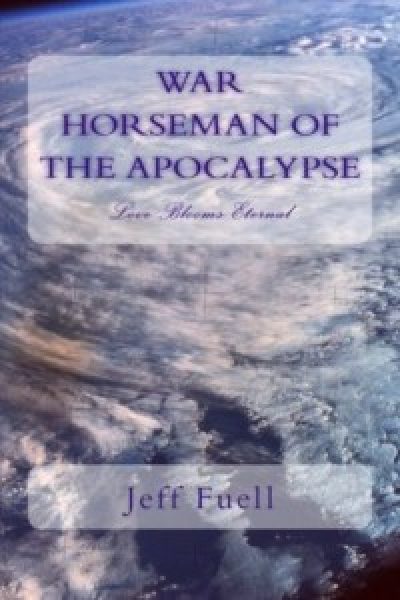 The mighty Horseman WAR has been feeling restless of late, a strange beckoning that he cannot explain seemingly calling out to him. Feeling the need to find the answer to this sensation he decides to journey to Earth in mortal form, all the while being exposed to one strange and humorous adventure after another as he tries to adjust to life as a human being. While there he experiences an overwhelming attraction to one woman. He soon finds out that she was his soul mate in a previous life… before he was chosen by God to take on the mantle of WAR, one of the Horsemen of the Apocalypse and one of the most feared and respected entities in the cosmos. Now, he must make a decision – will he continue to serve out the rest of his existence as the immortal Horseman, or will he choose to sacrifice everything in order to be with his true love once again?

“Brooding again.”
He looked over and became aware of Conquest walking by his side.
“Hello, Brother,” War said with a grin.
“So, how was it?”
“How was what?”
“Your trip to Earth, of course.”
“Completely uneventful.”
“Really?” Conquest asked with an arched brow.
“What?”
“What do you mean?”
“That look.”
“What look?”
“That look that you have when you know something that I don’t.”
“Is that what that look means?” Conquest said with a small laugh.
“That is exactly what that look means.”
They walked in silence for a few moments.
Conquest spoke, “It appears that you’ve been busy.”
“How so?”
“Not even on Earth for five minutes and already wrecking havoc,” he said playfully while shaking his head.
War looked forward stiffly. “I don’t know what you mean.”
“Oh, you don’t? Throwing somebody across the city…”
“He tried to rob me.”
“Breaking a man’s neck…”
“He was a thief, a person of no consequence whatsoever.”
“A person leaping from a building to his death…”
“I had nothing to do with that.”
“Bashing a man’s head in with a bat…”
“He provoked me for no reason at all when I was trying to help him, the idiot.”
“Slamming a man’s head into a wall…”
“He provoked me for no reason whatsoever.”
“Completely destroying a police station…”
“I had nothing to do with that; I just decided to leave. The other mortals brought it among themselves.”
“A man getting hit by a bus…”
“That caught me completely by surprise! I couldn’t believe it. A mortal pushed another mortal in front of a bus simply for entertainment.”
“So, are you saying that your vacation didn’t have its moments? That you didn’t enjoy any of it even a single bit?”
“Well, maybe I did catch myself enjoying it once or twice,” he said. They both laughed.
“It seems that was not the only thing that you enjoyed.”
“Oh, yes. The hot dogs. They were marvelous!”
“I’m not talking about the hot dogs. Although I am eager to try one.”
“What do you mean?”
Conquest indicated the small cloud that was floating in front of them and War cursed himself for forgetting about it. He waved his hand and the cloud diminished.
“She is very beautiful.”
“I’m glad you approve,” he almost growled trying to hide his embarrassment.
“Don’t feel ashamed, Brother. Earth is home to some of the most beautiful women in the universe.”
“Still, a mortal…”
“That makes no difference, whatsoever. A beautiful woman is a beautiful woman, no matter where she hails from.”
“I suppose that you are right.”
They walked on as they enjoyed the moment together.
“Something is troubling you,” Conquest finally said.
“I think that that has been pretty obvious for awhile now.”
“No, beyond that.
They stopped and faced each other.
“Brother, may I talk to you in confidence?” War asked.
“Of course, Brother. It is what I am here for. Frankly, I have always wished that you would have opened up more during our time. You have always been somewhat of a loner. It is not healthy. You are one, of course, but we are also Horsemen, the four of us joined as one forever.”
“I realize that and it does warm my heart to have the three of you as my Brothers. However, this one thing does trouble me of late.”
“What is that?”
“Lately, I have been having… visions, I guess is the best way to explain it. I have seen what I believe is myself in another time, another place. I believe I am a mortal and there is someone standing by my side. Even though it is difficult to see, I believe that it is the mortal woman, even though that that is impossible.”
“It may not be,” Conquest replied.
“What do you mean?”
“I… hesitate to say, Brother.”
“Please, I beg of you.”
Conquest looked up at the ceiling and sighed and then looked back at War. “You do realize that before you became War, you were a mortal?”
“I realize that, yes.”
“Apparently, after all this time, your mortal ways are making themselves known to you.”
“How so?”
“The visions.”
“Mere shadows, nothing more. Like dreams.”
“Did you notice that when you were on Earth in mortal form, that you were having feelings that you had never felt?”
“Such as?”
“Annoyance? Impatience? Even jealousy?”
“Well… I suppose that I did. What of it?”
“You are an immortal. When have you ever felt impatience?”
“Impatience? Well, I remember… remember…”
“Yes?”
“I… do not recall.”
“Because an immortal never feels impatience. There is nothing to be impatient about. But, as a mortal…”
“As a mortal, impatience is a very common trait.”
“Exactly.”
“But, that is nonsense. How many times in the past have I assumed a mortal guise and not been bothered by such trivial things?”
“Never, but you were not also feeling the way that you are now.”
“The shadows?”
“Yes.”
“Brother, I sense that you know something that I do not.”
Conquest remained silent as he regarded the floor between them.
“Brother?”
He raised his head and looked at him.
“I do not wish to hurt you with knowledge that would deeply penetrate you.”
“Brother, if you know something that I do not, I beg you tell me. If there is a connection to the mortal woman, I must know what it is.”

Be the first to review “WAR: Horseman of the Apocalypse – Love Blooms Eternal by Jeff Fuell” Cancel reply