You are here: Products Wanting to be Happy by Luke Jones 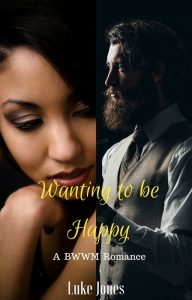 Wanting to be Happy by Luke Jones

Based out of Washington, DC, Luke wanted to create stories that make his readers forget about reality and dig deep into those dark desires they really want to explore. While he is versed in writing in the BWWM genre, look for more works to come in the form of Bad Boy stories, Billionaire stories and perhaps, one day, Lesbian stories.

I have always been a fan of writing in the BWWM genre after getting my first taste of it from ghostwriting. I kept getting these bursts of story ideas that eventually I decided to look a little deeper into it. This idea came from a fantasy I shared with a friend of mine: older mentor figure with his young protege. Rather than base this around myself, I wanted to write something that could excite the imagination while I write.

It did not take Eve long to get dressed in her bikini. As usual, Julia was calling the shots about how the trip should go. Not that she minded, however. It enabled her to be on auto pilot the entire time. As Eve took her panties off she noticed a small wet spot on them and blushed from embarrassment.
She was glad that Carmen finally pushed her away from Robert as she clung tightly to him. It had been a year since she saw Robert face to face, but in the years’ time, she felt a deeper bond with him. He had helped her deal with sheer embarrassment of being dumped by what she thought could be the love her life and made her feel loved when she needed it the most.
As soon as he stepped out of the house, she saw him in a different light. He was no longer her “play-father” or her “play-uncle.” Robert O’Brien was a man with whom she felt a strange attraction to. He was not as muscular as Gordon, who went to the gym every day, but he had a certain presence about himself that made her feel safe. Robert was the type of man she always imagined she would be with: strong, silent and caring.
Now that she thought about it, she realized that this was probably what made her attracted to Gordon. She had no hopes of living that fantasy with Robert, but with Gordon she could. An attraction that could have possibly been growing since she started developing breasts, was finally being realized before it was promptly snatched away. Now, however, she had a taste of what it was like to bed a silver fox and she wanted it back.
Eve then began to notice that she was running her hands over her soft caramel skin. Each move she made sent shivers down her spine. She imagined Gordon’s hands on her body. Would they be rough? Would they be as firm as she knew they could be? She wanted him to take her and it filled her with anxiety that it could not happen. The more anxious she became, the more the wetness between her legs seemed to form.
Eve’s breathing became shallow as she pulled off her panties and went to the door and locked it. She needed a few minutes and did not want to be disturbed. She closed her eyes and let her mind wander into the dark recesses of her mind. That place where all her lustful thoughts awaited her. She stood there against the door in front of Robert who was stark naked; his member dangling invitingly between his legs.
She feared what she might do, but was so turned on by the sight of his thick cock. Her eyes looked at Robert who remained fixed on her. He leaned in and began to lightly lick along her neck making her bite her lip. His tongue felt so good as it shot shivers down her neck all the way to her kidney area. As the cold shivers hit her neck, she pushed her chest out wanting him to suckle on her large brown nipples. Robert’s hand reached over and gently massaged them; making a moan escape her lips.
Eve went rigid as she opened her eyes. The phantom Robert was gone, but she listened to make sure no one was listening to her pleasure herself. She decided to move away from the door and lay herself on the bed. Eve took off her bra and let it fall to the side as she sucked on her fingers.
As the young girl closed her eyes, she immediately transported back to her fantasy and watched as Robert suckled on each finger. She wanted him to worship her the way men worshipped his daughter. For once, she wanted to feel powerful; and she did.