You are here: Products Vital Perception by D. L. Given 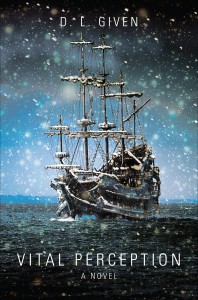 Vital Perception by D. L. Given

The seeking tunnel started immediately with what looked like little effort. Heidi maneuvered it as if she were born to do it. The others stood motionless staring into its center ready to take control of it any second, and I knew at this point they could do it. The rate that we were improving was nothing if not impressive. Even I found myself calmer and maybe even looking forward to the next time we would gather to form a tunnel. I had never noticed before, but realized, I could actually feel the pull of what we were doing in my arms as far up as my elbows. It could effectively be described as an energy that could only be created by the union of so many with a unique ability or gift, something much greater than our selves. A sudden sense of purpose inundated me—a purpose I’m sure none of us understood. I felt a sense of urgency for some rationalization or explanation.

D. L. Given lives in Ohio with her husband Bruce.

Proximately three days after I finished the rough draft on “The Elder Effect”, I realized I wasn’t satisfied with the completion of the story. Where “The Elder Effect” felt like a struggle to get the story told, “Vital Perception seemed to fill the pages faster than I could get the words down. It was a pleasure to spend time with the characters that I had become to love to dearly. I hope others will enjoy their story as well.

Sample from Book:
Preface
“We understand our brother provoked what happened to him, but he’s still our brother.”
Magnus cleared his throat and moved to the edge of his seat, his arm resting on the table. “If you’re asking us to bring him back, I don’t think that would be possible or wise on our part.”
“We realize you would be uncomfortable at the thought of bringing him back under the circumstances, but we hoped you might help us put him in a somewhat more hospitable location and civilized environment. We don’t want to lose him to a hungry predator.”
I thought of how many times I had imagined just that. It felt like some kind of cruel justice, that we ourselves would have to retrieve Mitch from a place so inhumanly unfriendly it could only be a place nightmares were made of. I still could hardly believe that he had survived it. If we had had a choice or were able to think things through, I like to think we would have thought of another way to keep ourselves safe from him. Since that day, I had never been able to come up with even one alternative.

Be the first to review “Vital Perception by D. L. Given” Cancel reply