You are here: Products Virtual Harmony and Other Short, Sweet Romances by Liese Sherwood-Fabre 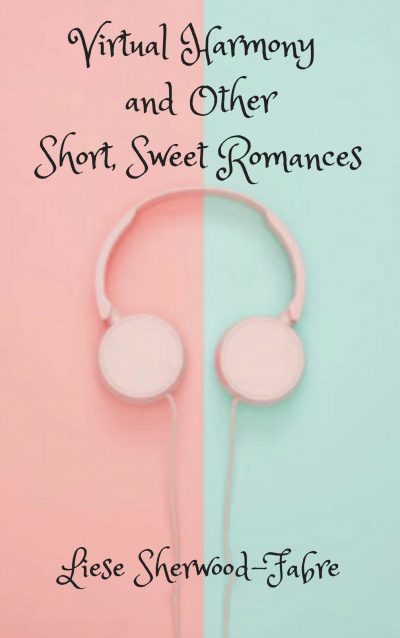 Virtual Harmony and Other Short, Sweet Romances by Liese Sherwood-Fabre

Love can bloom in infinite ways.

Eleven short romances follow love through cute meets to taking friendship to the next level to rekindling a marriage. Feelings can be sparked by an errant computer file, a hunt for diamonds, or even a fortune teller’s tale. All that is needed is to open one’s heart to let it in.

Search, find, and deepen love along the way in these sweet romances.

Liese Sherwood-Fabre, knew she was destined to write when she got an A+ in the second grade for her story about Dick, Jane, and Sally’s ruined picnic. After obtaining her PhD from Indiana University, she joined the federal government and had the opportunity to work and live internationally for more than fifteen years—in Africa, Latin America, and Russia. Returning to the states, she seriously pursued her writing career and has published various pieces. Her debut novel Saving Hope, a thriller set in Russia was based, in part, from her observations while in that country. She has recently turned to a childhood interest in Sherlock Holmes for an as-yet unpublished series on Sherlock growing up in a rather unusually gifted family. Along the way she has written and published a number of short stories, garnering awards such a Pushcart Prize nomination. She recently collected eleven of these tales into a volume: "Virtual Harmony and Other Short, Sweet Romances."

"Virtual Harmony and Other Short, Sweet Romances" gathers a number of very short stories I authored over time into one volume. All of them examine the connection that sometimes occurs between two people. In some, it is the “meet cute” where a couple sees something in the other at their first encounter—a woman in search of the owner of a music playlist mysteriously appearing on her computer or when strangers sit next to each other at the opera. Others take an existing relationship to the next level such as the temporary employee and her boss who obey company rules about dating between supervisors and employees or two neighbors who meet while one is in disguise. Finally, one shares a couple’s efforts to reconnect on a camping trip.

While all the stories have love in common, they also show how each couple’s story is unique. The spark between them can be initiated by an apparent apartment break-in, a snowball fight, or a flat tire. What follows after is where the magic lies.

From “Virtual Harmony,” the first story in the collection:

I slumped into an empty chair at the coffee bar around the corner from my apartment. I was ending this foolishness. Now. For two weeks I’d been on a wild goose chase and gotten nowhere. Time to give up.

It’d all started innocently enough. After plugging in my new MP3 player, and booting up my computer to download my playlist, my finger froze just above the mouse. An unfamiliar file folder appeared along with the others: "George's Songs."

Who was George, and how did he get on my computer?

Having moved into the neighborhood less than a month ago, I didn’t know anyone in the area, and no one had access to my computer. Another new icon appeared at the bottom of my screen and blinked on and off. My new wireless system was working. I returned my gaze to the “George’s Songs” icon. Somehow, my computer's system had picked up this George’s file and downloaded it to my machine.

Curiosity won out over caution, and without thinking twice, I opened the file to check out his playlist. Almost the entire list of songs I’d planned to download onto my MP3 player were already in George’s.

Whoever he was, George had good tastes.

And done all the hard work for me. All I had to do was download the file, and my MP3 player was ready to “rock and roll”—literally. I owed him. He’d saved me a whole evening’s work.

But more importantly, some of the unfamiliar songs intrigued me the most. His eclectic tastes, spanning across a variety of artists and genres, deepened my appreciation of this unknown fellow music-lover.

Most amazing of all, in the days that followed, my computer continued to update George’s file each time I turned on my machine. I became addicted to checking for new additions to "George's Songs" and fantasized about the man I knew only through his choice in music.

By the end of the second week, I knew I had to find him. I'd made a few friends at work but still hadn't met anyone like the person I knew George had to be—someone with musical tastes as extraordinary and unique as his.

Be the first to review “Virtual Harmony and Other Short, Sweet Romances by Liese Sherwood-Fabre” Cancel reply