You are here: Products Viral Spark by Martin McConnell 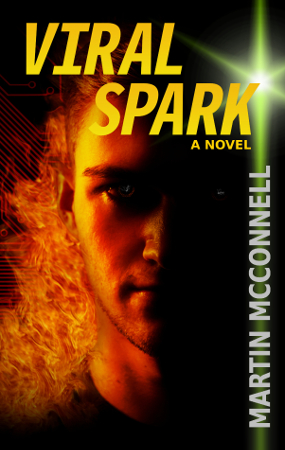 “A retelling of the original Viral Trilogy, McConnell has condensed, distilled, and masterfully rewritten the original story beautifully.”

If you enjoyed the original series, you will appreciate the tweaks to the storyline. If you haven’t read any of the Viral books, you’re in for a treat.

From the back cover:

The world has become a place of comfort, where a shopping trip means heading to the first floor to collect new food tubes for the printer. Menial tasks, like cleaning up or cooking, are relegated to robots, and Robert’s job while finishing school is to maintain them. With only three classes remaining, he’s hoping for something better.

Then everything starts to glitch:
the robots, the building, and even the people.

What starts as glitchy videos, misbehaving touch-screens, and random fighting, grows into a race against time to fix the problem before it escalates. Maybe he can land a cushy programming job in the process, but this virus is more than it appears…

More believable than iRobot, more grounded than most over-the-top scifi novels, this book takes place in a high-tech future that might be closer than you think.

Martin McConnell holds a Physics degree from SIUE, and when he isn't writing speculative fiction, he's motivating other authors, stargazing, reading, or playing Kerbal Space Program. He avidly encourages everyone he meets to seize control of their dreams by driving their own plot. You can find him on twitter @spottedgeckgo, or at his website writefarmlive.com. If you would like to receive updates on his future projects, send him an email at [email protected]

This story has been through a lot. It started as a short story concept for writing in present tense about a world where most people never leave the building they live in, like a city in a box. An indie startup publisher liked the premise and commissioned me for novellas, and when that deal eventually eroded I decided to rework it into a novel and put it out myself. My inspiration for keeping the story out there has really been the people kind enough to tell me they loved it. Readers can be quite inspiring at times.
The theme of the story was inspired by years of studying philosophy, physics, and computer programming, mixing esoteric ideas with hard science and hard coding. I even started working on a prototype of the "virus." Luckily, that project has not been successful 😉

I tap the little button that says THEMES, and scroll down the list. Most of the complicated ones carry a heavy price tag, but there is always some kind of special promotion happening. There it is: Shipwreck. The sample photo shows fish swimming about a deep blue backdrop with water-rippled sky lighting and steampunk accessories. But it’s still higher than what I’m willing to pay. Hard to justify on a student budget.

The menu changes, and the list fills with plain colors and design choices ranging from solids to stripes to pattern fills. The holographics can be accent plants or bits of useless furniture, like bookcases adorned with trinkets. I select Island Green, and my apartment is transformed. It’s a good day for green.

The kitchen island loses its stainless steel and granite structure, converting itself into grainy bamboo, except for the black display, which remains smooth. The other counter tops and tables in the apartment shift as well, while the wall colors itself a creamy shade of lime. Light shines from behind me, and when I turn, there’s a window above the sink overlooking an ocean scene. There’s even sand dollars lying on the beach. Overhead, a solid white skylight appears.