You are here: Products Victim Of Love by Christa Maurice 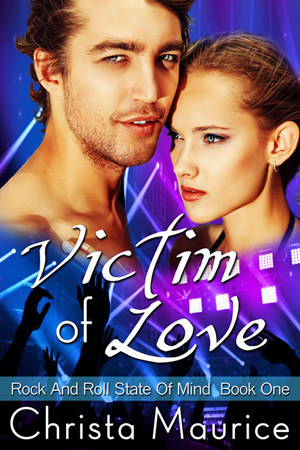 Victim Of Love by Christa Maurice

Tara Feingold just wanted to warm up on the Brazilian beach and when she meets Rick Lincoln, bassist for SendDown, things get very hot indeed. Especially when he starts getting serious and the other members of his band decide they need to scare her away with debauchery. When she returns to her normal life, will Rick still love her when he finds out she’s not the wild woman she was in Brazil?

VICTIM OF LOVE is the first book in the Rock And Roll State Of Mind series. If you enjoy wrenching conflict and characters who are struggling with change, then you’ll love this heart warming story.

Christa Maurice grew up with a passion for words and music. Possessing an unrivaled lack of musical talent, she stuck with words. She has been writing stories since she was twelve when her brother stopped playing music trivia games with her. (She kept winning. It bruised his ego.)

When not writing, Christa teaches English both in the US and overseas. She has taught in South Korea, Chile, and Abu Dhabi. In her spare time, Christa is an avid traveler. Highlights include trips to Paris, Kuala Lumpur, Jordan, Prague, and Venice. Currently, she is living in Ohio.

Lounging on the beach on a vacation in the Philippines, I daydreamed about meeting a hot guy and having a torrid affair. Surrounded as I was by guys who looked like Arnel Pineda of Journey and following my own rock and roll fantasies, that guy became a rock star recording an album. I didn't get a chance to work on the idea until I was working in chilly Chile where I was now surrounded by hot Latin men and in desperate need of being warmed up. It worked.

He lowered them into the surf, never relinquishing control of her mouth. The waves drenched them both. He slid his hands under her shirt heading for her bra clasp, but she caught him, pulling away just enough to speak.

“I have a speed limit, remember?” she told him.

He caught her mouth again, satisfied with the expanse of skin she allowed and the fact that she was going to make him work for her. A wave washed up to their shoulders. He kissed her neck getting sand on his lips. The salt water gave her an amazing flavor. Utterly exotic. Here where the local girls poured themselves all over him with their spice, this American woman who tasted of salt water was the most exotic flavor he’d tasted in months.

She drew one knee up between his legs, arching. The pressure on his groin was exquisite. Flares exploded behind his eyes. Another wave crested around them. As the water retreated, he followed it to the neckline of her tank top. Shoving it away with his mouth, he kissed the swell of her breast. She writhed, increasing her pressure. “You are about to exceed the speed limit again,” she murmured.