You are here: Products Vampire’s Kiss (After Dark Book 2) by Sarah Bailey 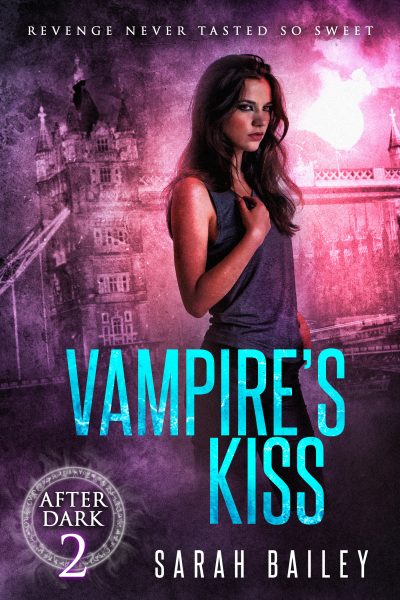 Stalked by a vampire. Propositioned by another. Revenge is a dish best served cold.

A supernatural stalker was not on Daisy’s bucket list. When best friend, Ella, puts her in touch with the new head of London’s bloodthirsty underbelly, she’s drawn into a world she wanted no part of. Gavin isn’t what she expected. He gives her his word he’ll look into her vampire problem, but he also offers something else entirely. The spark in his bright green eyes is impossible for her to resist.

Ella’s aversion to vampires causes a major rift between the best friends. Daisy can’t help but wonder what really happened the night Ella killed Gavin’s predecessor. With her life threatening to unravel, someone wants her. Badly enough they’ll stop at nothing to get their hands on Daisy.

Will she survive the night? Or will she succumb just to end her misery?

Born and raised in Sussex, UK near the Ashdown Forest where she grew up climbing trees and building Lego towns with her younger brother. Sarah fell in love with novels when she was a teenager reading her aunt's historical regency romances. She's always had a love of the supernatural, avidly devouring paranormal romances and TV shows such as True Blood and Supernatural.

Sarah currently resides in Berkshire with her husband. Music is one of her biggest inspirations and she always has something on in the background whilst writing. She is an avid gamer and is often found hogging her husband's Xbox.

This book came not long after I finished writing Demon's Destiny. I knew I wanted to write Daisy and Gavin's story from the moment I introduced Daisy as a character. She was all the inspiration I needed. A fiery, outspoken heroine who wasn't afraid to challenge the meticulous and domineering vampire, Gavin.

She took a deep breath before she knocked.
“Come in.”
She turned the handle and walked in. She closed the door behind her before she turned to look at the man sat behind the desk. Lukas had said he was the vampire boss. She wished she’d asked more questions about that part. What was he the boss of?
“Daisy, I assume.”
He had a deep voice. It sent a shiver down her spine. He wasn’t anything like she’d expected. He had brown hair, neatly styled with a pair of bright green eyes behind a set of designer glasses. She almost laughed. A vampire with glasses? How ridiculous! Surely, he didn’t need those? From what she’d heard, they had perfect senses, which included heightened vision. She noticed his clothes. A dark blue shirt with cufflinks and a suit jacket was hanging over the back of his chair.
“Yes. I’m sorry, Lukas didn’t tell me your name.”
She was vaguely aware the bartender had mentioned his name, but she couldn’t remember what it was. The vampire gave her a small smile. She couldn’t deny he was handsome in his own way.
“Gavin. Please, have a seat.”
He was awfully polite for a vampire, but she didn’t know what to expect from them. She moved into the room, looking around with interest. It was full of framed photos of various famous people with a few filing cabinets. He sat behind a large desk with a laptop off to the side. She took a seat in one of the two leather chairs in front of the desk.
“Lukas told me you are being harassed by one of my kind.”
“Yes. He said you were like the boss or something.”
“I control this territory.”
“This territory?”
She arched an eyebrow.
“London.”
“Oh, that must be a big responsibility.”
He smiled again. It was more like an indulgent smile you gave a child rather than a genuine one. She immediately felt irritated. She didn’t need him treating her like a little kid. That other vampire had referred to her as a little girl and she hadn’t much liked that either.
“It is.”
“How do you know Ella and Lukas?”
“Lukas dealt with my predecessor in matters relating to demons. Now, he deals with me.”
“Why did you agree to help with my problem?”
She didn’t care if he was annoyed by her questions. She wanted to make sure she could trust him.
“I owe Lukas a favour. It is also bad form for one of us to be harassing an innocent human. Now, will you tell me about this vampire?”
He owed Lukas? She had a sneaking suspicion that this was something to do with that vampire who kidnapped Ella. Hadn’t Lukas called this guy then to find out where Ella was? She would have to ask him about it.
“He’s been following me for like two weeks. I keep seeing him everywhere. I thought he was just some creep, but he turned up at my show tonight.”
“Show?”
His face remained impassive despite his question. It unnerved her.
“I’m in an amateur dramatics society. We put on a few plays a year.”
“I see.”
“Anyway, he showed up, so, I confronted him. He seemed amused by me more than anything else. He showed me his fangs and admitted he was a vampire. When I told him to back off, he said I should watch myself. Something about me garnering interest.”
“You confronted him?”
He betrayed a little incredulity in his expression. His lip twitched and a small frown appeared on his forehead.
“I’m not going to let some guy intimidate me. Vampire or not.”
“You are aware of the danger my kind poses to humans?”
He placed his hands on the desk, staring at her intently.
“I don’t doubt you’re dangerous, but I don’t take kindly to stalkers.”
She folded her arms across her chest in annoyance. Who did this guy think he was? She wasn’t some kind of damsel in distress who needed protection. She was here because she wanted the vampires to keep their rogue on a leash.
Before she had time to blink, he was in front of her, hands pressed down on the arms of her chair, his face far too close to hers.
“You need to be careful of what you say. Confronting a vampire is a dangerous game.”
She glared up at him. What the hell is this? If he thought this shit was going to make her back down, he had another thing coming.
“Excuse me. You’re in my personal space.”
He looked at her with those green eyes, full of restraint. He smiled in a way that felt distinctly smug.
“You’d do well to remember how easy it would be for me to snap your neck right now.”
She gulped. She couldn’t help it. He exuded power and danger. She wasn’t repulsed by it. His eyes were captivating. She took a breath. Despite the growing urge within her to submit, she straightened her spine.
“I’m not scared of you.”
That was a lie, but she wasn’t going to admit that to him. Nor did she want him to know she was feeling something else as well. He wasn’t her type, but the danger surrounding him had her skin tingling.
“No? Why, pray tell, can I smell your fear?”