You are here: Products VAMPIRE DEVIL by Rosemary A Johns 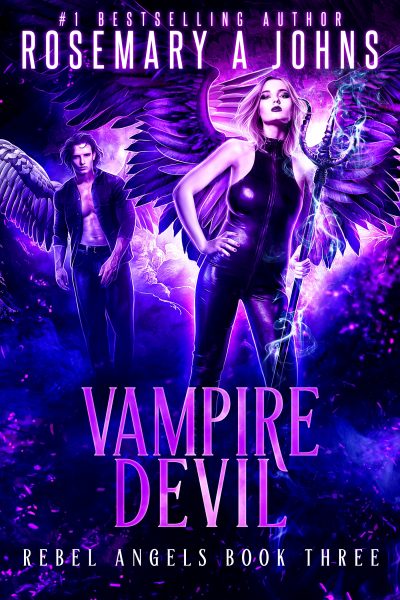 VAMPIRE DEVIL by Rosemary A Johns

This is why Fallen angels fear the light…
When Violet discovers her father is king of hell, she’s tested in Devil’s Quests. If she fails, the vampire she loves will become the army’s plaything.
“WARNING: Your life will be put on hold” – Books, Books, and Ahh Books
Fans of Buffy and Lucifer are sure to devour the sexy & magical Vampire Devil from the USA Today Bestselling author Rosemary A Johns!

She studied history at Oxford University and ran her own theatre company. She’s always been a rebel…

VAMPIRE DEVIL is part of the USA Today Bestselling REBEL ANGELS series. The REBEL VERSE is a range of series filled with bad boys, romance, and sassy heroines!

I peered out at the shadowy vampires beyond the light who were running bones along the bars.
Humans called them vampires, but I’d discovered they were Fallen angels who’d been cast out of Angel World where my mother reigned, leading to centuries of war.
And now?
Captured, I was trapped in the Fanged Wild West: only the most savage rebels survived.
Oh yeah, and my dad was the sheriff.
I spun, whirling my ash-blonde hair like fire, before raising my hands. “Place your bets, bitches.”
Because this was the Cage: the fighting ring where anything went, and we proved our worth in the Under World through pain to win the prize.
I was a huntress, princess, King of the Under World’s daughter and undefeated Champion since I’d been brought here — reluctant guest — eighty-seven fights ago.
How else could I judge time trapped below the City of London in this Fallen Under World?
Alone.
Each time I fought — and won — without the blokes who’d saved me and battled by my side, I couldn’t help the worming thought: did I need anyone but myself?
Would I ever be allowed to see my fam again?
A shadowy veil of pain, grief, and despair touched me through the bond with Rebel: my bondage rebel angel.
Could he feel it…my rejection?
I shuddered, allowing the ache for only a moment before I shook it off. Exhaustion clung to me like spiderwebs. Then I straightened my throbbing shoulders. The thrill of the fight lit me up, fairyland. I fiddled at the straps on the black leather armour, which was slashed down the back to release my wings, tightening it over my latex top: I was being roasted inside.

My obsidian wingtips quivered.
It was never a sign of singing unicorns when they got with the bone rattling.
I eeped when the steel floor tipped, fairground ride special, and I skidded…towards the tarred cage bars.
I furled my wings behind myself, like a kid curling its hands over its bum to hide itself from a smacking.

I scowled, flushing, but couldn’t help closing my eyes and waiting for the sticky thud. Only to trip backwards, as the floor gave a metallic hiccup and levelled.
I gasped, just as I was caught in a grey-winged embrace; cherry scented feathers swept round me, cloying in their sweetness. A tongue flicked out and, lazy as a cat, licked up my throat.
I arched, wriggling closer.
This cowboy either had a shooter in his pocket or…
I shivered. “No more fights today, Misrule, this bitch is toasted to a crisp. Stick a fork in me: I’m yummy barbequed.”
A sigh. “Your audience awaits, Bone Princess. The show must go on.”
“Then are you stepping up, bro, or can I get with the Fang whomping already? Public groping’s not on my to-do-list.”
A deep-throated chuckle.
Then I was swung around.
The Master of Misrule stroked my wings; heat coiled through me, zinging desire in each light caress. His black eyes blazed, as he gazed down at me. I was lost in his towering shadow: a punk god.
The ringmaster of the Cage had bones threaded through his high afro like pearls; a frilly lace cravat hung tongue-like over his PVC catsuit and coat.
The ancient vampiric black inside me carolled rejoicing at his hold, even as the angelic violet chanted warnings.
Oomph — I elbowed Misrule in the guts, and he let go.
Misrule bowed, before kissing the tip of my nose. ‘We shall hasten to the main act then. Whatever the lady wishes.’
I snorted, “In your dreams.”
He waggled his eyebrows. “In every Fallen’s since our princess so cruelly denies us…entry…”

I reddened. “Congratulations. You’ve just gained Gold Level Brat.”
Misrule laughed, dodging back, as I dived after him.
The spotlight dimmed, and I could see beyond into the cavern. The fiery violet tips of the vampires’ grey wings lit up the gloom, as they hovered in gangs or clutched the sides of the bars like they were the ones in cells.
In Angel World there would’ve been regimented division: the male Wings kneeling at the female Glories’ feet.
Here the gender divide, however, had been torn down. All were equal in the bedlam. Fishnets, leather, bondage. The flash of silver piercings, tattoos, and Mohicans. Below, the sounds of shagging — slap of flesh against flesh, howls, and smacks.
Guess they didn’t have a problem with public groping.
It was a wild chaos of desire, passion, and pain.
And I was the star of the show.