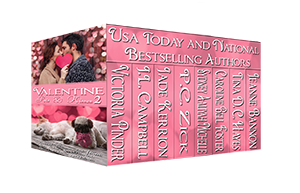 Jeanne Bannon has worked in the publishing industry for over twenty-five years as an editor and writer. Come visit her website www.jeannebannon.com.

The whole set was inspired by the romance authors who are featured here and by the popularity of last year’s first Valentine’s Pets & Kiss boxed set. I wrote Love on Trial as a love letter to one of my favorite cities, Chicago. I chose a Boston terrier and a Jack Russell for my pets because two of my friends had both of these dogs, and I fell in love with their personalities. I remember visiting my brother in Chicago and taking many long walks with him and his dog along the shores of Lake Michigan in Evanston and at the dog park near the zoo. The rest of it was simple.