You are here: Products Upon Us by Blakely Chorpenning 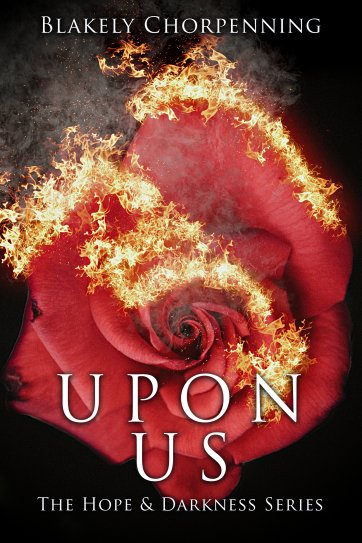 Upon Us by Blakely Chorpenning

Twenty-five years into a self-imposed apocalypse known as the New Beginning, a clanless woman must abduct a villager while navigating a mysterious, zombie-like plague in order to steal next season’s harvest before everyone starves to death. Through deception, conspiracy, and the horrors of an expanding pandemic, love thrives where a world chose to die.

Blakely Chorpenning lives with her family in the American South. She hopes to create a lasting bond with readers through complex characters and raw situations that speak beyond age, background, and time. When she is not writing genre and literary fiction, she enjoys crafting and has a knack for breaking electronics with her mind.

When the world ended it wasn't from war. It wasn't from hatred at all. It was the most singular example of unity the human race has ever managed. Threatened by an ailing planet and insatiable human advancement, world governments agreed to ban the modern way of life, cutting off electricity, technology, and medical services, dismantling the global economy. Together, every household on every continent prepared for a new era. It was the only answer to save our future.
Turn everything off for one hundred years.
It was time to reset humanity. To reset our path.
The written word became life. It would hold the secrets of mankind, our wishes as well as our sins. Past generations had run the world so close to its limits, skating across the line of oblivion with such freedom. Greedy. Reckless. With the end in sight, humanity would rig the system, manufacturing new limits.
Now, we live in dark times called the New Beginning. A reign of death and disease is ever-present, revoking medical advancement, amending Darwin's theory, soul by soul. The government has set our future in the hands of scientists and theorists, determined to trace a new course of existence out of the darkness, into the light of good intentions. As this small piece of humanity hunts for a cure from itself, the rest must survive. During preparations, bureaucrats raced to the cities, to the undergrounds, leaving the average populace to de-evolve into small clans and abide by preset laws established to protect our new way of life.
But not everything is as predictable as human nature.
While a mysterious pandemic of rotting flesh and brain degradation has swept the region, threatening to extinguish even the healthiest clans, dwindling food rations have sparked panic. During these dark times, desperation and resolve may unravel us to the very core and damn our bones. Or spawn our greatest accomplishments.
My world may seem dark, but it's one of promise for our future. For those of us who live to see it.