You are here: Products Upheaval by Suzanne Perazzini 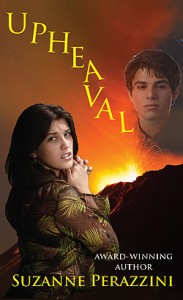 While Nyeta is kayaking on a river in the wilderness with her schoolmates not far from the outdoor pursuits school they attend, a massive quake turns the earth inside out, cracks it wide open.

Cold, shocked and terrified, the six surviving students set off on a terrifying journey to find help.

Along the way, they encounter boiling rivers, erupting mountains, dead and dying animals, the unhinged, those who have already turned to the dark side and a gentle hermit deep in the ranges. They have to fight, hunt, care for their wounds and learn tolerance and self-sacrifice.

Not all are destined to reach their destination.

I now have eight published books. I read all the time – anything from women’s fiction to thrillers. If I don’t have a book on the go, I feel bereft and centreless. Yes, that’s a word – I think.

I live in New Zealand, a land of volcanoes and earthquakes. The ultimate disaster is not such a stretch but I stretched it anyway. The idea of survival after such an apocalyptic event and the choices that get made fascinates me, hence this story.

Be the first to review “Upheaval by Suzanne Perazzini” Cancel reply