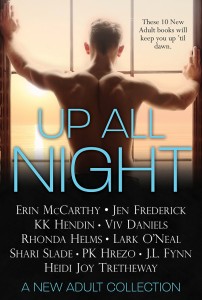 Grab this limited-time bundle of ten hot New Adult books, each #1 in their series.

UP ALL NIGHT will keep you up ‘til dawn with romantic stories featuring whip-smart college guys, bad boy rock stars, heroic marines, a sexy teacher, and a smokin’ hot snowboarder.

Together, these books have earned more than 1,600 five-star ratings and usually sell for over $30. Each book is a standalone, first in its series, and the set includes two NYT and USA Today bestselling authors.

You Make Me, Blurred Lines #1

Caitlyn’s perfect world with fiancé Ethan is shattered when her first love Heath returns to Maine after a mysterious four-year absence. Heath wants her back, but Ethan doesn’t want to let her go. And when one love allows her to breathe, but the other feels as essential to her life as air, how does she choose between them?

Tess lives her life according to the secrets she’s sworn to keep: the father who won’t acknowledge her, the sister who doesn’t know she exists, and the mother who’s content playing mistress to a prominent businessman. But when she transfers to her dream college and reunites with her first love, she begins to break the rules.

Beryl doesn’t know why Gavin Slater trashed his apartment, abandoned his dog and fled the country. But as his house sitter, she must pick up the pieces for the white-hot rock star to find out why he’s running–and what can bring him back.

When Anna’s mother disappears with the family fortune, Anna and her father must return to their small Ohio hometown–a temporary situation, she vows. But finding work, caring for her depressed father and locating her mom are harder than Anna anticipated. Not to mention a sexy male kindergarten teacher who makes Anna question everything she thought she wanted…

Jess Donovan wants a better life than the one she was born to, but how do you figure how what you want when life has never been anything but a series of hurdles? When mysterious, sexy snowboarder Tyler Smith shows up in her life, Jess doesn’t know if he’s an opportunity for love–or her downfall.

A futuristic romance along the winding path of time. It’s the year 2069 and even though eighteen-year-old Bianca Butterman is heir to the family time travel biz, she never expected to be earning her official time-craft license with golden boy pop superstar, Tristan Helms, in tote. Her life is about to get a lot more complicated … and exciting.

Come Back To Texas, Twelve Beats in a Bar #1

Hayley and Nate had the perfect love story before life crashed through it. Now, three years, one deployment, and a few YouTube videos later, everything’s about to change.

The Opposite of Nothing, Copeland College #1

When socially-awkward campus DJ Callie Evans falls for her bad boy BFF, she doesn’t tell him. Instead, she creates a fake online profile and “catfishes” him. The closer they get, online and off, the more she realizes she has to confess. And risk losing him forever.

Grace Sullivan exchanged letters with a deployed Marine most of her teen years. She fell in love with him but was devastated to learn her feelings weren’t reciprocated. Two years later when he shows up at her posh Midwest college claiming they belong together, she is wary and worried … and falling in love again?